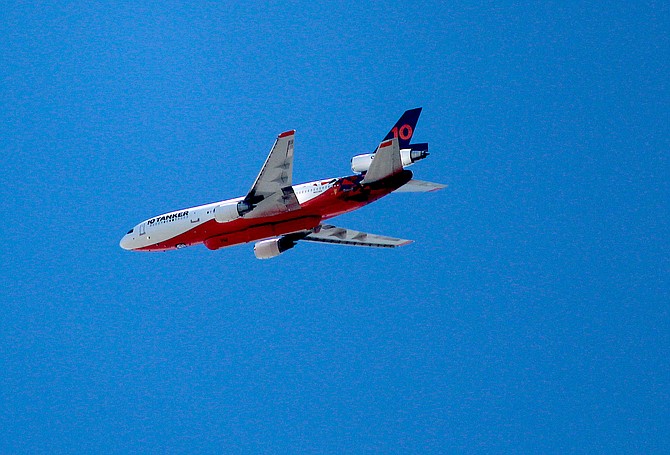 A DC-10 fire tanker circled over Carson Valley on Tuesday as clear skies permitted aerial firefighting to help slow down the Tamarack Fire.

The Tamarack Fire appeared to have burned into Nevada over Tuesday night, though at dawn on Wednesday there weren’t any flames visible from Highway 395.

That doesn’t mean the fire that has raged around Alpine County for six days is done with Douglas. With no containment and pretty consistent growth, the fire is a giant amoeba that is burning wherever wind drives it into new fuel.

As of Wednesday morning’s National Interagency Fire Center Situation Report, the fire remains at 39,045 acres with no change over the past 24 hours, but no containment either. More than 1,200 firefighters are working the blaze with their numbers increasing by 140 with 27 hand crews, 99 engines and nine helicopters.

The cost of fighting the fire hit $5 million and the Forest Service continues to report the loss of 10 structures.

On Tuesday night, as the fire appeared to burn ever closer to Double Spring Flat in the Pine Nuts south of Gardnerville, residents from Leviathan Mine Road south to Holbrook were asked to evacuate.

An evacuation center was set up at the Topaz Ranch Estates Community Center for that new influx of evacuees.

A dawn on Wednesday, homes and the forest within sight of Highway 395 were still intact, while smoke continued to rise over the ridge.

The fire has seen significant crowning and spotting ahead of it, and fire officials say the timber is as dry as it can be.

The northeastern flank of the fire reached up into the area north of Leviathan Mine toward the Pine Nuts and Highway 395 on Wednesday.

On the western flank near Woodfords, it appears that firefighters have enough of a handle on the fire to permit Alpine County residents who were evacuated from their homes to be escorted in to retrieve items and check on their property.

Escorts were shut down on Tuesday afternoon after the fire threatened to cross Highway 88, which remains closed on Wednesday morning.

Just imagine if they actually did something when the fire was less than 1/4 of an acre we wouldn't be going through this and the expense of this fire right now. It's as if some things are done intentionally!