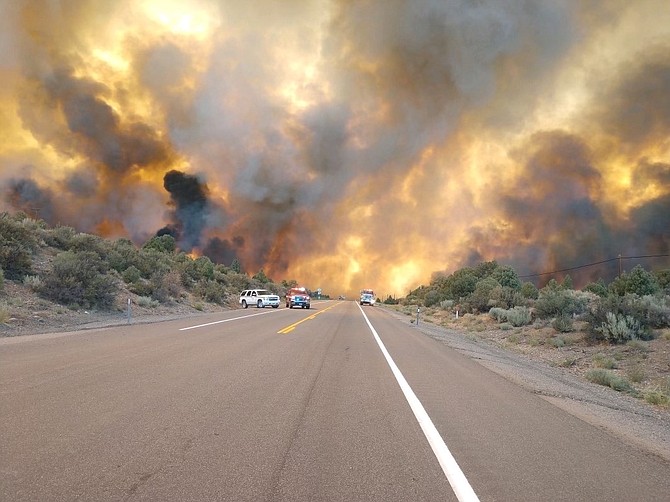 The Tamarack Fire burns across Highway 395 in this U.S. Forest Service photo.

A 2,500-acre spot fire north of Holbrook Junction spawned by the Tamarack Fire is burning on the east side of Highway 395.

With fire on both sides of Highway 395, Topaz Ranch Estates is essentially cut off rom Carson Valley.

Douglas County deputies and members of the Sheriff’s Search and Rescue Team went door to door in Topaz Ranch Estates again on Thursday afternoon to urge residents to evacuate.

With a population of 1,600 people TRE is the largest community to be threatened by the fire, so far.

Power is out to 824 NV Energy homes and businesses in the south county community.

Restoration isn’t expected until 9:15 p.m., but that will depend on what the fire does as winds continue to bedevil firefighters.

Another outage affecting 457 customers in the Gardnerville area code, likely including Topaz Lake is being blamed on the brush fire, with a 9 p.m. restoration time.

Power is out to the Leviathan Mine radio transmitter, according to broadcast reports.

Douglas County Dispatch reported losing Internet around 5:40 p.m. While that’s unlikely to be related to the fire, it is hampering some emergency services.

Authorities are issuing a second evacuation notice in Topaz Ranch Estates as the Tamarack Fire raged across Highway 395 south of Spring Valley.

Personnel on scene say smoke and flames are looming over both sides of the highway.

Douglas County Search and Rescue personnel sent four units over Sunrise Pass in order to make it to the south county due to the danger of fire on the highway through the Pine Nuts.

“Emergency warnings are being sent to cell phones,” Douglas County spokeswoman Melissa Blosser said at 3:20 p.m. “Do not wait for emergency personnel to come to your door, although deputies are in the area asking residents to leave the area now.”

Evacuees from the south county are urged to go to Smith Valley High School.

Livestock evacuations are at Dressler Park in Wellington. Members of the Sheriff’s Mounted Posse have been directed to take the long way around as sheriff’s and fire units are pinned down along Highway 395.

Concerns are the fire will climb the hill on the east side of the highway and go into the neighborhood of around 1,200 people.

Sustained west-southwest winds of 20 mph gusting to 34 mph are being recorded at China Spring.

Escorts on through the Highway 395 fire closure lasted about an hour before the Tamarack Fire threatened the highway near the rest stop north of Holbrook Junction.

Douglas County Sheriff’s deputies started providing escorts around 1 p.m. for the public from China Spring Road to the state line, but were forced to give it up around 2 p.m. Traffic was light at the closure in Bodie Flat with only a handful of vehicles allowed past on their way to points south. However, windy conditions caused the fire to expand to within a half mile of the highway.

Firefighters reported keeping the Tamarack Fire west of Highway 395 in the Pine Nuts on Wednesday night as it grew another 10,000 acres to 50,129.

“The fire pushed to Highway 395 and burned north and south along the highway but did not cross it,” Fire spokeswoman Lisa Radosevich-Craig said in a morning update.

More than 800 people have been evacuated and 500 structures are threatened by the fire which reached 4 percent containment for the first time in six days of burning.

Firefighters worked through the night to protect structures and conduct back burns to slow the fire’s spread.

Stopping the fire from crossing Highway 395, which remains closed, is a priority for firefighters today.

“The fire pushed to the dozer line at Spring Valley, however work completed around structures is holding,” Radosevich-Craig said. “Fire continues to move south toward Topaz Lake. Firefighters are looking for options to cut off the fire at the junction of highways 89 and 395. Structure protection was fully engaged in the Spring Valley and Holbrook areas and around Leviathan Mine.”

A smoke plume on the side of the mountain near Woodfords was the other active portion of the blaze on Wednesday where backing fire was influenced by the canyon slope.

The fire remained east of Highway 88.

“Fire continues to back toward Highway 88,” Radosevich-Craig said. “They have held the fire above the structures. Today, crews will continue to strengthen established fire line and hold the fire south of Highway 88.”