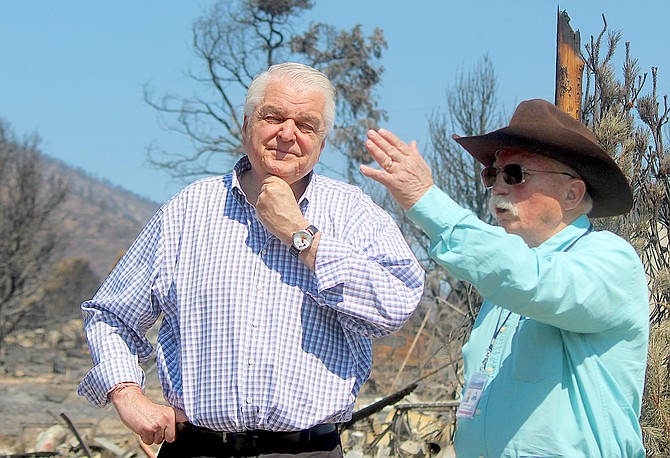 The governors of Nevada and California gathered in Holbrook Junction to survey the damage done by the 106-square-mile Tamarack Fire.

Preliminary reports indicate that two dozen structures were destroyed in the blaze that burned the equivalent of a 14th of the land area of Douglas and Alpine counties.

Gov. Steve Sisolak and Gov. Gavin Newsom spoke to the press at the top of Penrod in Holbrook Junction where Douglas County Commissioner Mark Gardner described how fine artist Joyce Pike and her family lost her home.

“She just turned 92 on Tuesday,” Gardner told the governor. “I’m lucky to have several of her pieces.”

Sisolak and Newsom both declared disaster areas over the Tamarack Fire area, which covers Douglas and Alpine counties.

“Thanks for all you’re doing up here,” Sisolak said to firefighters. “It’s obviously devastating, there’s a lot of acres. I appreciate you guys. You’re on the front lines doing the hard work.”

As of Wednesday morning, the fire was 59 percent contained at 68,393 acres.

“This fire has presented some significant challenges like no other I have seen for some time,” said East Fork Fire Chief Tod Carlini. “The weather conditions and fuel density in most areas have led to some very erratic and dangerous conditions.”

Carlini thanked residents for their cooperation and to firefighters who have been fighting the blaze that burned 65,000 acres over 20 miles from the Sierra to the Pine Nut Mountains.

“I also want to extend my appreciation to all those personnel who have been staffing and managing evacuation shelters in both Gardnerville and at Smith Valley High School in Lyon County,” Carlini said. “The community, service club, and faith-based groups that have helped in this effort are amazing. Our priorities remain the safety of the public and fire suppression personnel, to see that the fire is extinguished, and to begin a recovery, which includes re-populating evacuated areas when it is safe to do so.”

The evacuation shelter at the Douglas County Community and Senior Center was closed on Tuesday as teams of building inspectors fanned out through both counties assessing damages.

Alpine County released a map showing the homes destroyed and damaged in the fire. Douglas is preparing a similar map for the Highway 395 corridor, it announced last week.

On Monday, highways 395 and 88 reopened as the fire began to wane. Highways 89 and 4 through the Tamarack Fire burn area reopened 7 a.m. Wednesday to through-traffic only, the California Highway Patrol announced on Tuesday.

“There will be no access on Forest Service lands,” CHP spokeswoman Ruth Loehr said. “Be advised there is still firefighting work being done in many areas. Use caution and reduce speeds on roadways as firefighting vehicles will be on the roads.”

Firefighters won’t be the only workers on the road as utility companies work to repair equipment and restore service.

Repairs may require road closures for up to two hours without notice 10 a.m. to 10 p.m. Saturday, Sunday and Monday.

Evacuations for residents of Wolf Creek and Silver City along Highway 4 were lifted on Wednesday.

Fire managers warned residents returning to their homes there might still be fire activity nearby.

“Smoke and possible isolated flare-ups may occur for several weeks within the fire area as the fire burns through isolated fuels, such as dead or downed trees,” officials said Tuesday morning. “There is still firefighting work being done in many areas.”

NV Energy continued to work to restore power to the Highway 395 corridor with an estimated restoration for 124 homes and businesses set to 2:45 p.m. Wednesday. That time has been delayed several times over the past few days as linemen replace poles and power line lost to the fire.

Precipitation helped cool down the Tamarack Fire on Monday, contributing to a line around more than half the fire and reducing the danger that it will resume its rampage.

“A group of afternoon thundershowers dropped heavy rain onto some sections of the fire,” officials said of the 106-square-mile fire. “Last night, steady rainfall covered the entire fire area.”

Grover Hot Springs State Park remains closed due to the fire, which finally saw some precipitation on Monday.

The fire perimeter hasn’t expanded significantly either south or west since last week, when the brunt of the blaze charged northeast toward Spring Valley and Holbrook, prompting a call for evacuations of the Highway 395 corridor and even 1,600-resident Topaz Ranch Estates.

All Douglas and Alpine evacuations were lifted by Wednesday morning.

The Tamarack Fire was first reported July 4 started by lightning from a thunderstorm the previous day. First just a single tree, the fire grew to a quarter-acre on July 10 when fire officials said they were aware of the fire, but felt it posed little danger of spreading.

Almost a week later, on July 16, the fire burst into life, sending a huge smoke plume towering over the Sierra as winds drove it down the canyon toward Markleeville. Firefighters were able to keep the fire out of the town, but it raged out of control for days spreading to Woodfords where it burned over Turtle Rock Park.

After burning for five days, the fire crossed into Nevada on July 21 and crested the ridge into Double Spring Flat, finding new fuels in the piñon forest to the southwest of Highway 395. Highway 395 was closed that evening and residents advised to evacuate as the flames marched closer to homes.

Douglas County commissioners and the governors of both Nevada and California declared a state of emergency over the fire area.