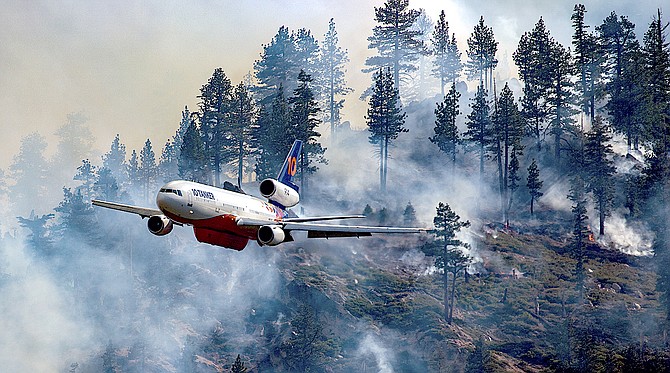 A DC-10 Tanker makes a pass over the Tamarack Fire on Tuesday.
JT Humphrey | Special to The R-C

Containment on the more than 50,000-acre Tamarack Fire was revised back a month after the fire drove northeast into Douglas County on Wednesday.

Fire officials estimated there wouldn’t be a line around the blaze until the end of August, admitting that it’s likely the fire won’t be entirely extinguished until the first snowfall.

As of Thursday morning, there is 4-percent containment of the fire which burned vigorously above Leviathan Mine Road and Woodfords on Wednesday.

Douglas County residents from Leviathan Mine Road south to Topaz Lake and east to Topaz Ranch Estates were advised to evacuate on Wednesday night after the fire threatened to cross Highway 395.

With an estimated population of 1,630 residents, Topaz Ranch Estates represents the largest community in the fire’s path, so far.

The highway is closed from China Spring Road to Holbrook Junction and from the state line to Sonora Junction this morning.

On the west side, Highway 88 remains closed at the state line to Picketts Junction.

According to the situation report issued Thursday morning by the National Interagency Coordination Center, the cost to fight the fire is up to $6.7 million. The report revised the number of structures lost from the fire down from 10 to eight.

The 1,200 firefighters battling the blaze equals the entire population of Alpine County, though like the fire, they’ve spread out to Douglas County.

There are 27 twenty-member handcrews and 96 engines battling the blaze making up the majority of the firefighters. Large air tankers and helicopters have contributed to the firefight when the smoke cleared.

First reported July 4, the fire may have been started by the same July 1 electrical storm that set the East Fork Fire that burned southeast of Gardnerville. Humboldt Toiyabe Forest managers said the fire was around a quarter acre and didn’t appear as though it would spread on July 10, only to suddenly explode to life on Friday afternoon, sending a huge plume of smoke visible from all over Western Nevada.

Over five days, the fire grew a thousand times in size from under 40 acres to nearly 44,000 acres.

A Type 1 Incident Management Team took charge of the fire on Tuesday.

Operations Section Chief Pat Seekins said a high priority is to keep the fire from spreading into the Double Spring and Pine View neighborhoods and to keep it south of Highway 88.

The trigger line for evacuations is Bryant Creek, a tributary to the East Fork of the Carson River.

The fire burned to within a half-mile of the Nevada state line on Tuesday.

Fire officials said their priority was protecting the Highway 395 corridor from Ruhenstroth south.

“We have a lot of crews on the 395 corridor, and we’re working assessing risk,” Seekins said at a Tuesday evening briefing. “We had crews looking for options to establish a dozer line to exclude impacts from the fire if it pushes northeast. There’s a lot of potential for this fire to move around in here. Our highest priority is the 395 corridor.”

The Washoe Tribe’s Emergency Operation Center has lifted the evacuation order for the Hung-a-lel-ti Community in Woodfords.

The Tribe will continue to provide lodging to the residents but is strongly discouraging Elders and others with special needs from returning, since it’s possible they’ll have to evacuate again. Power is back on, but that might not remain.

The Tribe’s order doesn’t apply to the rest of eastern Alpine County’s residents, who are under a mandatory evacuation order.

The fire continues to pump smoke into Carson Valley with air quality hitting very unhealthy levels at the air quality monitor at Ranchos Aspen Park and deteriorating. Visibility at Minden-Tahoe Airport was down to four miles at 8:15 a.m.

National Weather Service Reno forecasters issued a statement that with similar weather conditions over the rest of the week, smoke and haze will continue to be an issue as long as the fires are burning.

They advise residents to try and limit outdoor activity in areas with poor air quality.