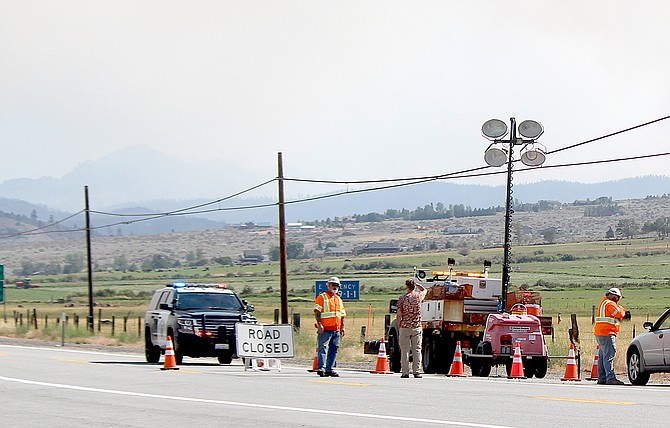 Cal Trans workers talk to a motorist at Highway 88 and the state line on Tuesday afternoon. Highway 88 was closed as the Tamarack Fire continues to expand.

Highway 88 closed at around 1 p.m. Tuesday as the Tamarack Fire continued to rampage out of control.

The Alpine County Sheriff’s Office canceled escorts for evacuees to their homes in the fire area.

The highway is closed from Picketts Junction to Nevada.

Douglas County Sheriff’s Search and Rescue members conducted notifications for residents living near the line, alerting residents that they might prepare to evacuate should the fire cross into Nevada.

Streams of cars were northbound on Highway 395 from the south county on Tuesday afternoon as firefighters staged near Leviathan Mine Road and watched the smoke come closer.

Fire officials expressed concern Tuesday that the Tamarack Fire might burn into Fredericksburg in Carson Valley.

Searchers reported going door to door both in the Pine Nuts and at the base of the Carson Range.

Only the governor can order mandatory evacuations in Nevada, but that doesn’t mean following emergency responders request to evacuate.

A Type 1 Incident Management Team took charge of the fire on Tuesday.

Operations Section Chief Pat Seekins said a high priority is to keep the fire from spreading into the Double Spring and Pine View neighborhoods and to keep it south of Highway 88.

The trigger line for evacuations is Bryant Creek, a tributary to the East Fork of the Carson River.