Driver in fatal 2020 collision due in court Tuesday 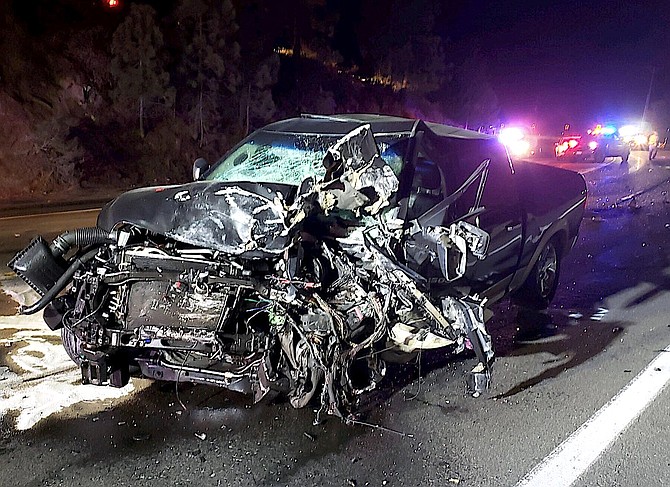 A Reno man is expected in court on Tuesday in connection with a 2020 fatal collision at Lake Tahoe. NHP photo

The driver in a 2020 collision at Lake Tahoe is scheduled to be arraigned in Douglas County District Court on Tuesday in the death of a South Lake Tahoe man.

Peter Dykeman Jr., 34, was killed when a 2011 Dodge Ram pickup crossed the center line on Highway 50 at Presbyterian Curve on Nov. 3.

Alexander Gutierrez Gonzales, 25, is facing felony charges of driving under the influence causing the death of a South Lake Tahoe man.

According to court documents, Gutierrez Gonzales was driving to Reno in the borrowed Ram when he struck Dykeman’s westbound Honda Element. Dykeman was declared dead at the scene.

He is facing charges of felony drunk driving causing death and reckless driving.

He was arrested in June after the Nevada Highway Patrol completed their investigation. He waived his preliminary hearing in Tahoe Township Justice Court on Nov. 30.

According to the Nevada State Police, the collision was one of six in 2020.

Four people were killed on Douglas County’s state highways during 2021, according to the Nevada Department of Public Safety. Only one of those involved an impaired driver.

Reno resident Katelyn Shobert, 34, was ejected and killed June 26 when the driver lost control of a southbound Mazda CX-9 on Highway 88 just south of Minden driving it into a field. Driver Gregory Bettis, 49, of Redding, Calif., was arrested for driving under the influence causing death.

No impairment was reported in any of the other fatal collisions.

Gardnerville resident Justin Adams, 24, was killed April 20 when he lost control of his Subaru Forester on Highway 88 two miles north of the state line and struck a power pole.

Gardnerville resident Rafael Cortez, 52, was killed March 7 driving eastbound on Highway 50 after his Toyota Tacoma was clipped by a Subaru and overturned landing on the hood of a westbound Toyota Corolla.

Gardnerville resident Sean Leonard was killed while turning into Bodie Flat from Highway 395 on Feb. 23 after a semitruck failed to stop and ran into him from behind.

A Gardnerville Ranchos man was killed after he was thrown from a vehicle fleeting deputies on South Tillman Lane on Nov. 16. Oregon parolee Blake Edward Thacker, 31, was driving the vehicle when it struck another car and rolled, ejecting John Schulze, 43. Thacker remains in custody facing felony charges related to the death.