Storage project up for hearing on Tuesday 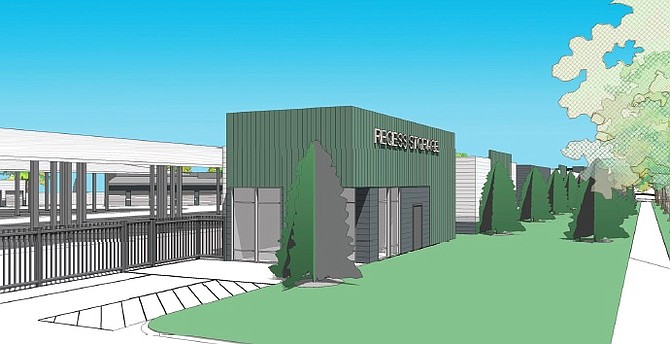 A rendering of storage units proposed for a location south of Gardnerville.

Two major projects south of Gardnerville are in the pipeline for approval.

Approval of a 79,215-square-foot of enclosed self-storage and 60,300-square-feet of outdoor covered RV storage is being sought from Douglas County Planning Commissioners on Tuesday.

Owner Butch Peri and American Recess are seeking approval of a major design review for the project on a 25-acre parcel located at 1608 Pinenut Road.

Gardnerville Town Board members voted 5-0 against the project at their Nov. 2 meeting because the project didn’t meet Gardnerville’s design guidelines, Deputy Planning Director Sam Booth said in a review of the town’s denial letter and minutes of the meeting.

“Douglas County staff believes the project meets the required standards and could have resulted in an approval,” Booth wrote. “However due to the recommendation of denial from the town and in consideration of the will to have a broader conversation … the director decided to refer this application for review and decision by the planning commission.”

Booth said the applicant submitted revised renderings to address Gardnerville’s concerns, including changing the color scheme and adding a stone veneer to the front of the building and accent features.

Highway 395 and Pinenut Road serves as the southern entrance to Gardnerville. The project itself is located in the elbow formed by the new and old right-of-ways of Pinenut Road, around 1,500 feet from the highway. Access would be via Pinenut Road south of the roundabout.

On Dec. 7, Gardnerville approved a major design review for a proposal to move Carson Valley Veterinary Hospital from its location on Highway 88 to one along Charlotte Way at Virginia Ranch Road.

“It appears the proposed use of a veterinary hospital will fit in well with other medical uses which are developing in this section of Gardnerville,” Town Manager Erik Nilssen said in his review.

With a green light from the town board, it’s unlikely there will be any further public hearings on the project.