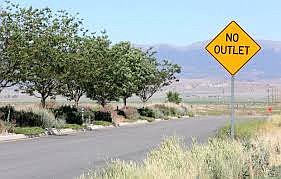 A second attempt to extract $1.1 million from the Regional Transportation Commission for Muller Lane Parkway was defeated 3-2 on Thursday when Commissioner Mark Gardner voted with the majority.

Saying the transfer from federal CARES Act money to the general fund and then to the Regional Transportation Commission looked bad, Gardner agreed the county is under a legal obligation to move forward on the road.

“I understand our legal obligation under the Park Ranch development agreement, and I’m not trying to negate that.”

Commission Chairman John Engels argued that the money could be taken from the RTC and then disbursed over time to meet the contract obligation.

However, County Road Engineer Jon Erb pointed out that he would have to return to the commission every month as the county received invoices from CA Group, which is designing the road now.

Engels vehemently opposed transfer of the money to the RTC on Dec. 17, 2020, threatening legal action if it moved forward, which it did by a 3-2 vote.

Construction of Muller Parkway across property owned by Park Ranch Holdings has been the county’s responsibility for at least the past 14 years. Under the previous agreement with the Parks, the right of way would be deeded to the county for construction of the alternate route around Minden and Gardnerville.

While the specific route has changed since the name was first used in February 1991, the parkway has been on the books since the late 1980s as part of a larger transportation plan.

That plan also included a mid-Valley arterial and a route south of Minden and Gardnerville that would straighten out Waterloo Lane.

However, the county hasn’t had the money to build any of those routes. Park attorney Mark Forsberg in 2019 asserted that the agreement for the right of way had expired.

To rescue the parkway, the county agreed to move 1,044 acres of receiving area from the Sleeping Elephant Ranch across from Topaz Ranch Estates to Park property located north of Minden.

Under a development agreement approved along with the master plan amendment, the Parks would be limited to 2,500 homes on their property to be built in six phases over 30 years.

That development agreement was the subject of a petition drive conducted by Commissioner Dave Nelson and wife Jeanne Shizuru and signed by Gardner and Commissioner Walt Nowosad. A neighbor along Orchard Road also sued the county over the Parkway alignment, but reached a settlement.

That prompted the Parks to sue the county and the committee, asserting that the petition dealt with an administrative action.

Last spring’s coronavirus outbreak hampered both the court case and the petition drive.

When the petition was turned in, clerks sampling signatures to see if they were viable discovered one of the pages hadn’t been notarized as required by Nevada law. That rendered it insufficient.

Shizuru and the committee challenged the ruling, and a visiting judge determined the petition insufficient. Then the judge heard arguments on whether the agreement was a legal target for a petition, and ruled that it was not.

Under the agreement, the county is obligated to build 2.4 miles of up to two lanes of the Parkway.

The rest is the responsibility of developers. It’s estimated that those two lanes will cost the county $12.5 million to build. The entire four-lane width would require three times that amount. The county sought a federal transportation grant last year but that was denied.

Engineers say getting the design work done for the road would improve the county’s chances of getting it built.

The developer of Virginia Ranch, located behind the Gardnerville Walmart is obligated to build four lanes from Grant Avenue to where the parkway now ends near Stodick Estates.

Under the agreement with the Parks, the county is obligated to build the road by 2026.