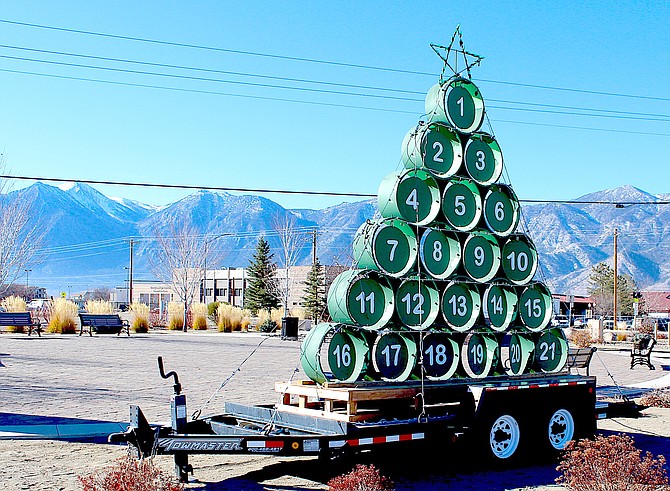 The Town of Minden's giant advent calendar is up at the intersection of highways 395 and 88.
Photo by Kurt Hildebrand.

A palindrome is a word, phrase, or date that reads the same forward and backward. The last month of the year brings a second set of 2021 numerical palindrome dates, following a first series that occurred back in January.

Dr. Aziz Inan, professor of electrical engineering at the University of Portland in Oregon, writes extensively about number patterns and palindrome dates. After coming across several of his articles and numerous publications in which he’s cited, I reached out to him via email to ask what drew him to these subjects.

In an article titled, “Numbers don’t lie; they do, occasionally, amuse,” published in the Portland Tribune last January, Inan detailed numerical curiosities appearing throughout the 2021 calendar.

When written out in MM/DD/YYYY format, today’s date of Dec. 2 (12/02/2021) reads as one of only a dozen, eight-digit palindrome dates that appear this century.

Inan pointed out that over the course of a century, the only two years to include 22 palindrome dates are the ones that end with 11 and 21. This high number of palindrome dates won’t occur again until 2111 and 2121.

Though he’s been writing about palindromes and number patterns for more than a decade, Inan doesn’t limit his numerical fascinations to the written page. He sometimes shares his discoveries and poses challenges to his engineering students at the University of Portland, which can lead to some lively discussions.

“I believe that topics such as palindrome dates possess the magical power to serve as fun brain teasers and also foster social interaction,” he wrote. “The spark I observe in my students’ eyes when I share with them my numerical findings and observations is beyond my expectation.”

For information and direct links to Inan’s written works, visit his website at faculty.up.edu/ainan/publications.html.

The Carson Valley is aglow with beautiful lights, and the illumination is set to increase with this weekend’s holiday kickoff events. If you’re looking for even more outdoor light festivities, consider Washoe Lake State Park’s Trail of Lights.

This is the second year the park hosts the drive-through holiday celebration, and Campground Loop B is lit up with all manner of holiday decor. Attendees will remain in their cars and listen to music of their choosing while driving through the loop to enjoy the decorations.

A couple of items to note:

Drive with caution. Eastlake Boulevard is very dark at night and frequented by horses and deer.

There is a vehicle clearance limit of 9 feet, 6 inches, including antenna. Vehicles exceeding that height won’t make it through the decorated loop.

Washoe Lake State Park is located at 4855 Eastlake Boulevard in New Washoe City. More information about the Trail of Lights can be found under the Events tab on the Nevada State Parks website at parks.nv.gov/.