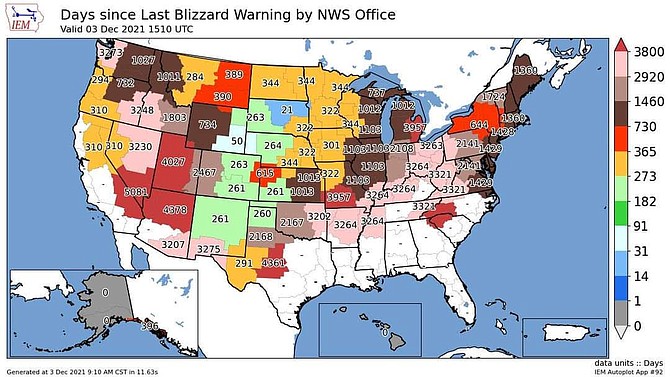 As of Dec. 3, it has been 310 days since the last blizzard warning, which was in late January of this year. While snow is predicted on the Valley floor on Thursday, there is no sign of a blizzard warning this week.

After a solid month of relatively warm dry weather, Carson Valley residents should stock up on wood and make sure pipes are insulated in preparation for much colder temperatures by the end of the week.

“A cold storm will drop into the region Thursday, with snow levels crashing to all valley floors,” forecasters said. “Accumulating snow is highly likely for all elevations of Western Nevada and the Sierra, however there are still variations in the exact time and totals.”

Forecasters are predicting that overnight lows in single digits could follow the storm with high temperatures in the 30s by Friday. Northwest winds of 15-25 mph will contribute to the bite.

“Overnight lows Friday night will drop into the teens and single digits across the region, with below zero temperatures in the colder valleys,” according to the statement.

“A change in our stagnant weather patter looks more promising by midweek through mid-month as our stubborn high pressure retrogrades west across the Pacific,” Weather Service Meteorologist Tony Fuentes said Sunday morning. “This opens the door for colder low-pressure systems to drop out of the Northwest.”

Should the forecast pan out, it’s likely motorists will face a challenging commute on Thursday.

Fuentes said that the storm is unlikely to generate major snow totals, it could bring a couple of inches which will affect travel.

The colder temperatures forecast to arrive behind the storm might be the thing that area ski resorts have been waiting for. While not producing a great deal of snow, the temperatures would allow the resorts to make snow that won’t immediately succumb to warmer temperatures. No dates have been announced for the opening of Heavenly or Kirkwood ski resorts, but a 20-percent discount on ski passes ends midnight Sunday.

The last measurable precipitation fell in Minden on Nov. 9 with .35 inches, or well below half the average of .79 inches for November.

December is typically one of the wettest months of the year with an average precipitation of 1.54 inches, but 2021 saw no snow at all in the Douglas County seat. It was one of only five Decembers since 1906 with no reported precipitation.

According to a map issued by the National Weather Service, Friday marked 310 days since the last time Western Nevada saw a blizzard warning. That Jan. 28 storm closed schools as 9 inches of snow was recorded in Minden.

A Dec. 7, 2009, storm that saw around a foot of snow fall in parts of Carson Valley also prompted the birth of the award-winning R-C Running Commentary, which will be 12 years old on Tuesday.