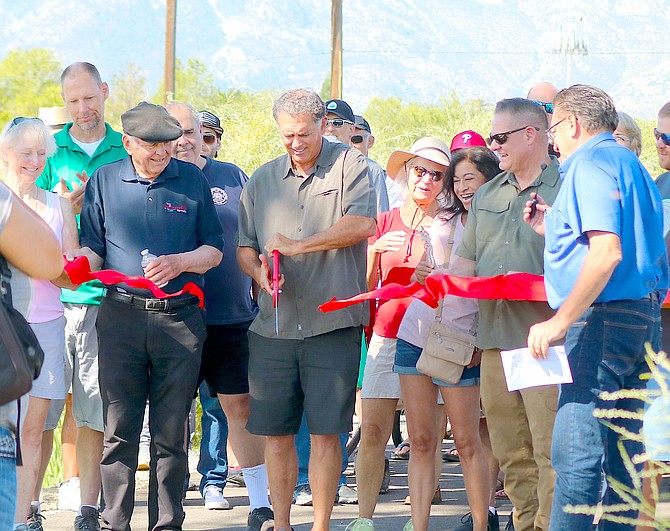 Douglas County Commissioner Danny Tarkanian mans the big scissors as town and county officials look on at the Martin Slough Trail dedication in Minden on Saturday.
Photo by Kurt Hildebrand.

Dedication of the Martin Slough Trail on Saturday is far from the end of the road, Douglas County Economic Vitality Director Lisa Granahan said Saturday.

Efforts to update the county’s 2003 comprehensive trails plan are funded and residents should expect a call for public input soon, Granahan told the crowd of about 60 officials and trail enthusiasts.

He said the Martin Slough proposal likely predated the trails plan, but he couldn’t pin down a date.

Dallaire said the 1.68 miles of trail just completed between Buckeye Road and the Gilman Ponds cost $1.8 million and connected Carson Valley Middle, Gardnerville and Minden elementary schools with a pedestrian route. The work also connected the three schools digitally with the installation of fiber optic line that will be 10 times faster than their previous connection, he said.

“I got calls from them regularly on this project, so it’s you guys who kept this going,” he said as a flock of geese honked their way overhead.

Unlike the recently opened Jacks Valley Trail, there aren’t any grades along Martin Slough.

“Public trails are great amenities for Douglas County,” Granahan said. “Approximately 30 percent of our residents are over 65, so these types of at-grade paved trails provide a significant enhancement to the public to continue to be active in the great outdoors.”

“This is for everybody in Douglas County who wants an at-grade trails,” she said. “It’s great for families, too. I see at least one stroller here. It’s great to see so many families who are out.”

She said the trail takes the prize for being in the most planning documents, starting with the 2003 plan.

“That’s how we get grant funding,” she said. “State and federal funders look favorably on projects that meet a number of planning goals and are supported widely by the community.”

In the case of the Martin Slough Trail, it was one of seven projects completed over the past 15 years. Two thirds of the $6 million it cost to complete those projects came from grants.

Granahan said it was time to retire the assertion that the county has added 70 miles of new trail.

“I think we’re closer to 80 miles,” she said. “This allows Douglas County to make great strides in one of its focus areas, which is capitalizing on outdoor recreation and lifestyle opportunities.”

After a new trails plan is approved, Granahan said next steps are to extend the trail to Lampe Park and then to the Gardnerville Ranchos.

Ranchos resident and advocate for that extension, Danny Tarkanian, represented the Douglas County Board of Commissioners at the dedication to cut the ribbon. Tarkanian then walked the trail, along with a portion of the crowd who took to bikes, scooters or just expended shoe leather on the way to Heritage Park where lunch was waiting.

Running north of Gardnerville and Minden, Martin Slough predates the founding of the towns and carries irrigation water to fields north of the East Fork of the Carson River, which runs south of the towns.

Of the four major water features along the trail, the Seeman Ranch and Mountain View ponds are the most recent. The trail currently ends at Jake’s Wetlands in Minden and the Gilman Avenue Ponds in Gardnerville.