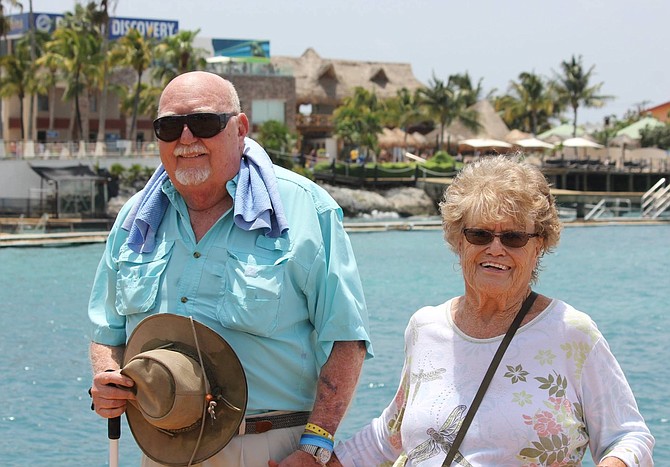 When Minden resident and longtime banker Craig Chambers came to Carson Valley a little more than a half-century ago, his plan was to earn his spurs as a manager and move on.

“I wanted to spend maybe four years in Carson Valley and get to be manager,” he told The Record-Courier in 1986. “The branch started growing, and I just couldn’t see going anywhere else. There was as much of a challenge here as anywhere.”

Chambers managed the bank located across from the CVIC Hall in Minden through a couple of name changes before he retired in 1997, according to son Rick.

On Easter Sunday, Chambers died at the age of 79.

During his life in Minden, he was president of the Lions Club and Minden Rotary.

“During his year as president of Minden Rotary, he was tasked with Rotary International to fundraise $65,000 toward Rotary’s goal of polio eradication,” Rick said. “In the ’80s, that was a significant amount of money for a small community to raise, but they did it.”

A native Nevadan, he was born at Elko General Hospital in 1941 to Alfred and Melba Chambers.

The family moved to Portola after World War II and then returned to Wells in the early 1950s. He graduated from Wells High School and attended the University of Utah, where he received a business degree.

A June 1971 R-C article announcing his promotion to loan officer said he’d worked at the bank for a year. He’d worked in banking for a decade, according to the article.

“Dad and Mom were very involved in supporting their kids in sports,” daughter Kim Robinson said. “Mom was the family cheerleader in every sport we played as dad was down on the field helping however he could. As my brothers played in Little League baseball, dad umpired for the Little League program.”

He and Bruce Park ran the Douglas High School football chain gang for more than 20 years. He was named a Top Tiger by the Douglas boosters in 1988.

The family tradition of going into the Pine Nuts to find a piñon pine Christmas tree was memorialized on the front page of The Record-Courier on Dec. 16, 1993, in a story about finding the perfect tree.

“This tradition will continue with our family for many years to come. As well as the family tradition of PineNut gathering we did every fall,” Robinson said.

He celebrated his northeastern Nevada roots by returning to Elko County to the Cottonwood Ranch, owned by his extended family.

“It was our family get-away almost every summer to visit our friends at the ranch to ride horses, round up cattle, celebrate the 4th of July at the annual ranch rodeo, run the annual horse drive and many other unforgettable life experiences,” Robinson said. “He taught us how to respect the working ranch and the people behind it, as well as the horses and cattle grazing the green pastures of the O'Neil Basin.”

No services have been announced.