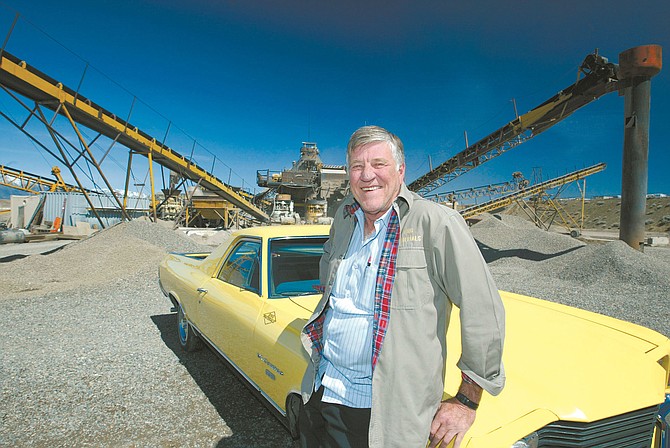 Gerry Bing poses with his yellow El Camino at the Bing Pit in the Gardnerville Ranchos. He was named small business champion by the Nevada chapter of the National Federation of Independent Business in April 2005.
Belinda Grant | R-C File Photo

For the first time in 55 years, the Carson Valley Chamber of Commerce was without Director Emeritus Gerry Bing Jr., who died Dec. 8, 2021, at age 83.

On Wednesday night, the chamber held its annual board of directors’ installation dinner at Bing’s favorite lunch spot, the Carson Valley Country Club.

“Director Emeritus Gerry Bing Jr. without a doubt served the Carson Valley Chamber of Commerce longer than any other member in its history,” Chamber Director Alicia Main said. “Gerry moved here in 1963 with a Civil engineering degree from Stanford and set out to make his mark with his father on the Carson Valley construction industry and business community.”

Bing joined the chamber in 1967, according to an interview conducted by Record-Courier Editor Tom Wixon when he was named president in 1975 at the age of 36.

“I joined to promote my business,” he said. “I feel that’s what the chamber of commerce is for, to promote business.”

Bing was on the chamber’s board for most of 14 years before being named Director Emeritus in 1990, a position that was created specifically for him.

“What we remember most about Gerry is his yellow El Camino,” Main said. “This was a fixture of the automotive landscape in Gardnerville for decades. You always knew where Gerry was, even when he didn’t want to be found.”

“Most important however was his generosity and dedication to the community and chamber,” Main said. “He attended these chamber committee meetings right up until his health prevented him from doing so in the final months of his life. When I wanted a straight, honest, from the gut opinion, I would ask Gerry for his no BS approach.”

Bing encouraged residents to support local businesses, which contributed to being named Nevada’s Small Business Champion of the Year in 2005 by the National Federation of independent Business

A lifetime member of the Elks he was named Citizen of the Year in 2007. He served in the U.S. Marines.

Among the honorees were past president Alex Uribe of State Farm Insurance, Ursula Prebezac of City National Bank, and Lois Wray of Biofilm Management, The Pink House and Daniels for their service to the Chamber.