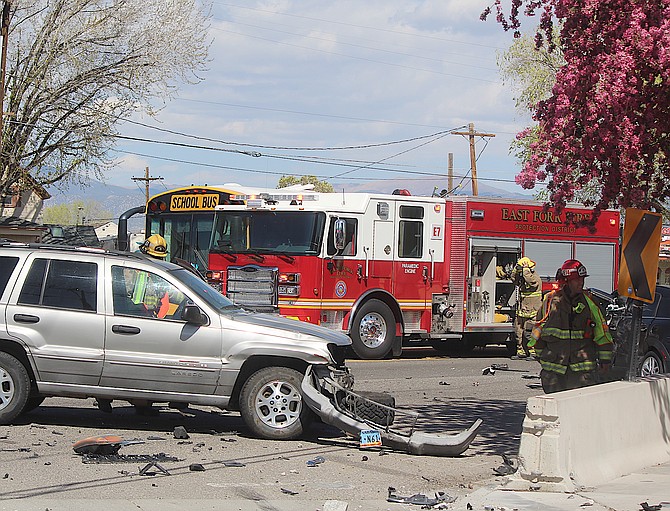 Highway 395 is blocked this afternoon due to a motor vehicle collision at Douglas Avenue. Take an alternate route. Photo by Kurt Hildebrand.

Traffic on Highway 395 was backed up all the way from the S-curve in Gardnerville to the Minden town line on Thursday afternoon after a three-vehicle collision.

Reported around 3:15 p.m., one person was transported to Carson Valley Medical Center after suffering a medical episode after the collision.

The collision occurred just as Gardnerville Elementary School was letting out, which contributed to the traffic congestion.

A Jeep and a Mini-Cooper were two of the vehicles involved in the collision. A third vehicle was driven into the vacant lot near the Gardnerville Fire Station.

Douglas County deputies and the Nevada Highway Patrol blocked the southbound lanes of the highway at Gilman Avenue while the wreckage was cleared.

Immediately after the collision, Douglas Avenue was bumper to bumper to Gilman as motorists sought a way to escape the traffic jam.

Deputies ended up having to close off the parking lots around Sharkey’s and the JT to get vehicles out of the area.

The southbound fast lane was reopened around 4 p.m. with traffic clearing by 5 p.m.

It was the second time on Thursday that a major Gardnerville route was closed.

Toler Lane near Stonegate was closed for around 20 minutes at 11:10 a.m. after emergency personnel responded to a report of a bicyclist down.

The victim was transported to Carson Valley Medical Center where he succumbed. The Sheriff’s Office is investigating what happened to him.