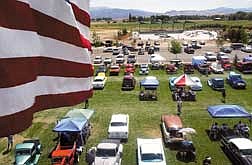 Photo by Brian CorleySeveral hundred cars were displayed at the Valley Cruisers Main Street Event on Sunday as residents came out to see the vintage automobiles. Much of the money made will go back into the community.