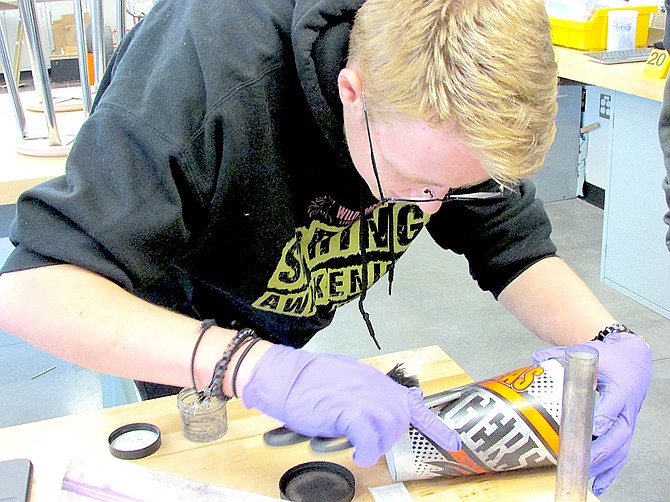 Junior Phoenix Berke removes fingerprints from a mug found at the scene of the mock homicide in Kimberly Tretton’s Forensics class Wednesday.
Photo by Sarah Drinkwine.

Patrol officers responded to rooms 706/708 at Douglas High School on Wednesday after a 911 call was made by a resident stating she heard gun shots. Upon arrival, the initial officer found a woman identified as Maybel Moody, dead in the apartment. The officer called upon Kimberly Tretton’s forensics students to investigate the mock crime scene.

Upon arrival the two teams of student investigators were instructed to secure the scene, photograph and sketch, collect and secure evidence, document actions and use the manpower available in order to solve the case and make an arrest.

The mock homicide is part of the forensics class offered at the high school. In the class, students learn how to investigate a crime scene, including containing the scene, collecting evidence, photographing and sketching, and analyzing hair, fiber and fingerprints. This is the second year it has been offered as a science fulfillment course toward graduation, said Tretton.

“The homicide scenario is 50 percent of the students’ final grade and puts together everything they have learned in the class,” said Tretton. “They did great, everyone really came together and did what they needed to do to make their conclusions.”

In the scenario, students were either investigators or suspects. The investigators were split into two teams and each member was given specific jobs including security guards, interviewers, sketchers and team leaders. The suspects were interviewed as the investigators discovered evidence.

“They’re learning the importance of teamwork and running a crime scene,” said Douglas County Investigator Nadine Jenkins. “I think they have a good grasp on basic investigation principles but are learning that it can be a lot more difficult than it appears.”

Jenkins was on site to help guide the students with the crime scene and provide realistic advice and procedures.

Eventually, the teams cracked the case and called upon the school resource officer Deputy Meyer to arrest suspect senior Rock Gignac for the mock murder of Maybel Moody.

Deputy Meyer arrested Gignac and led the perp walk down the hall of the tech building while the two teams celebrated their hard work.

“Everyone worked together to collect the evidence we needed in order to find our suspect and make the arrest,” said junior Ava Delang.