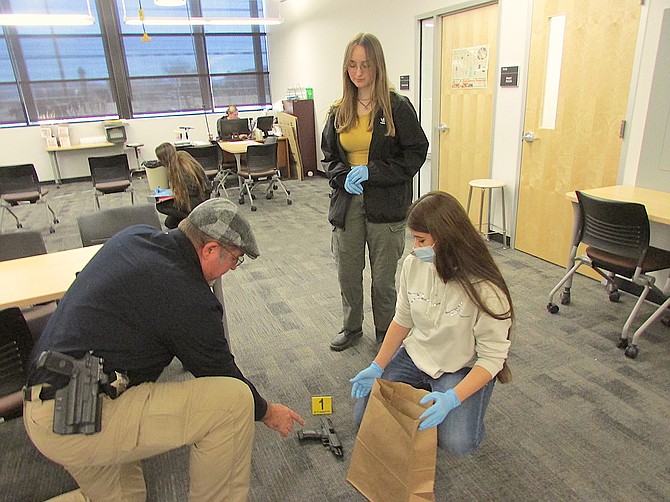 No outside person or journalists were allowed entrance to the crime scene in two Douglas High School classrooms Thursday without proper clearance first.

Manuel Garcia, a senior at the high school, took that duty very seriously.

“We have a crime scene here, what is your purpose?” he asked.

Inside, lay Aunt Mabel’s body with a head wound, a gun a few feet away and blood splattered near a coffee mug.

Garcia was one of about 15 students investigating the mock homicide in Kimberly Tretton’s forensics class. The scene was staged with a CPR resuscitation doll, gun prop and fake blood, but the investigative process the students under took was real.

Schultz and Investigator Nadine Jenkins were on site to help guide the students with the crime scene and provide realistic information and procedures of what to do and not to do in a case like this.

“It’s really nice to see this type of course being offered,” said Schultz. “It was a class like this that started my 30-year career, so this may be a path these kids might end up taking and they’re learning the skills and process it takes to do it.”

Inside the classroom Junior Sabrina Settelmeyer’s team were collecting evidence.

“It’s been challenging, but I’ve enjoyed the challenge and through gentle leadership and teamwork, we have a chance at being successful,” said Settelmeyer.

Settelmeyer oversees her team and directs the crime scene through the collection and analyzing of evidence process.

“I’m like a Swiss army knife here,” she said. “My skills are being challenged, but it’s been a great experience.”

Schultz showed the students the proper way to pick up evidence so as not to tamper with it.

“You want to pick it up from the smallest side you can find, because fingerprints are all over it and you don’t want to tamper it,” he explained. He also showed them how to properly move and store evidence.

The homicide scenario is 50 percent of the students’ final grade and is broken into two days. Day one, students contain the evidence and day two, they interview their suspects and try to find the perpetrator.

Through the course students learn evidence collecting, crime scene processing, crime scene photography, crime scene sketching and hair, fiber and fingerprint analysis. The course has been offered at the school for at least 16 years as an elective. This year it has been approved as a science fulfillment course toward graduation, said Tretton.

“It gives another option for students to fill that requirement,” she said. “Most students use biology or chemistry and this adds something different to their curriculum. It’s been a lot of fun and the students are very hands on with it.”