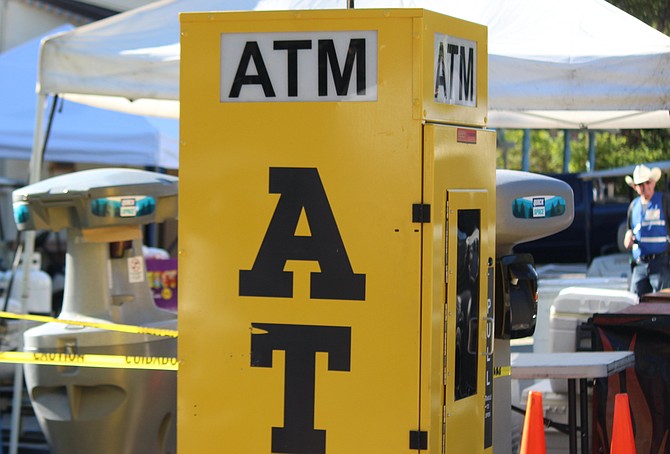 One of the many ATMs with an escort of hand washing stations stands in front of the Genoa Town Hall on Friday morning. Visitors and vendors may find Wi-Fi scarce in the oldest town during Candy Dance.
Photo by Kurt Hildebrand.

During the Candy Dance weekend Wi-Fi will be scarce in Genoa.

Genoa Town Manger David Qualls said the closest cell tower is in Minden and with nearly 30,000 people in the small town the service can get a little lagging.

“We do have a local network too, but it doesn’t accommodate to everyone and again with so many people it can go in and out,” he said.

Vendors are being encouraged to record information in whatever way works best for them.

“Some have mobile hot spots, some have the block card readers, which can help, but again if the Wi-Fi cuts out, it can be difficult so please have a back-up plan,” said Genoa Volunteer Alison Grey. “We are also encouraging people (customers) to take advantage of the atm machines.”

There are ATMS spread out throughout the town, Qualls said.

“They’re yellow, you can’t miss them, and they are serviced throughout the weekend, so they will have money available throughout.”

“This is an issue that has come up in the past and we are continuing to resolve the problem for future events, but in the meantime, we want the community, vendors and visitors to be aware that it can be an issue and to just prepare for it,” said Qualls.

The town will get reinforcements from the University of Nevada, Reno, Wolf Pack Battalion this weekend along with a campus fraternity, who will help with clean-up services.

Qualls said that including the UNR students, there are 180 volunteers helping to make the fundraiser a success.