Bear traffic deaths on the way to doubling this year 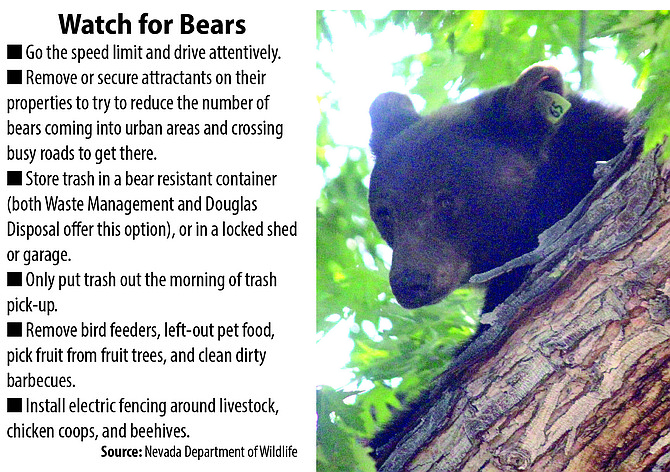 So far, 19 bears have been killed on Nevada highways since the beginning of the year, up from 14 this time in 2021.

The number is on pace to double this fall.

A bear was hit and killed Wednesday night on Highway 395 near the turnoff to the Lahontan National Fish Hatchery south of Gardnerville.

There were 15 bears struck as of Aug. 31, which is more than double the seven that were struck during the first eight months of 2021.

“Last year was a record year for bears being hit and killed by vehicles in Nevada, with 46 confirmed fatalities,” said Urban Wildlife Coordinator Raquel Martinez for the Nevada Department of Wildlife. “Unfortunately, this year we’re on pace to beat that.”

The state collects data from every reported collision site and works with NDOT, who have a study going to reduce animal-vehicle collisions in the state.

“One of our bear biologists responded to the area and discovered that it was a previously captured and tagged bear that was part of their wildland bear study from years prior,” Martinez said. “However, from the strike location we see that this bear had dropped down into town likely in search of food.”

With forage reduced due to fires, bears and other wild animals have been making their way into communities across Western Nevada in order to bulk up for hibernation.

Bears have been showing up on Ring cameras in Gardnerville knocking over garbage cans looking for something to eat.

“This time of year, bear-vehicle collisions really pick up,” Marquez said. “Right now, bears are active for up to 20 hours per day, traveling vast distances in search of food, and are trying to eat up to 20,000 calories.

Marquez said that’s the equivalent of 10 whole pizzas or 80 donuts a day.

“With this increase in movement and elevated food drive, we see a big uptick in bears crossing roadways and entering busier human populated areas – leading to more vehicle strikes.”

If people want to help the biggest things they can do is:

• Remove or secure attractants on their properties to try to reduce the number of bears coming into urban areas and crossing busy roads to get there.

• Store trash in a bear resistant container (both Waste Management and Douglas Disposal offer this option), or in a locked shed/garage.

• Only put trash out the morning of trash pick-up.