Motorists asked to watch for bears 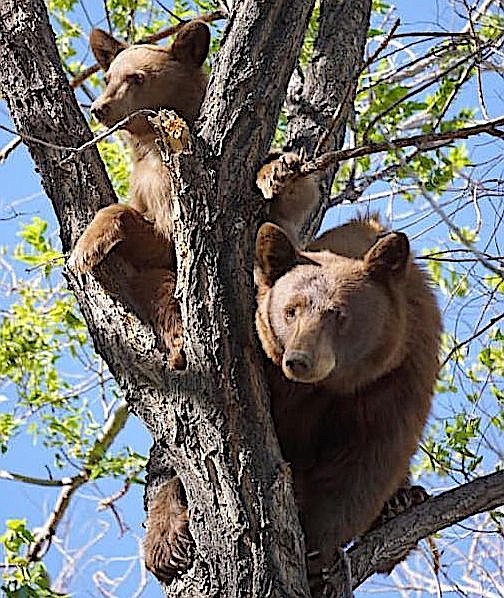 Wisteria Brimm took this photo of bears in a tree in Fish Springs over the weekend.
Photo by Kurt Hildebrand.

With more wildlife seeking refuge from fire and drought, creatures great and small are being hit on Western Nevada highways.

During the first 18 days of September 14 bears have been hit by vehicles in Western Nevada, according to state wildlife officials.

“There are more wildlife vehicle collisions than in a long time,” Nevada Department of Wildlife spokeswoman Ashley Sanchez. “No one wants to hit wildlife. It’s not safe for the person who hits the wildlife or the drivers around them. People should slow down and be cautious.”

Sanchez said there are a variety of animals coming into the neighborhoods looking for food, especially bears.

Carson Valley residents have reported bears in the Ranchos and Saratoga Springs with a family having apparently recently moved in at Fish Springs.

“We’re seeing the bear calls starting to kick in right now, especially in Douglas County,” Sanchez said. “Someone reported a bear in the river in downtown Reno.”

She said bears and other wildlife tend to follow streams and creeks seeking food.

“They travel a long way in one day,” she said. “They adapt, they’re very resilient animals, who know to escape the fires by making their way into new areas.

The bears are stuffing themselves in preparation for their long winter’s nap. Sanchez said that during hyperphagia a bear is seeking upwards 25,000 calories a day

While the Carson Valley fruit crop isn’t particularly huge this fall, apples will start to ripen with the first frost, which will draw bears and deer.

Sanchez suggested picking fruit from the trees and gathering any that falls on the ground to keep bears from visiting.

She is a fan of electric fencing around anything from fruit trees to beehives to keep wildlife out.

“Anything you can’t bring inside,” she said.

She confirmed that archers hunted two mountain lions in western Carson Valley recently, an indication that bears aren’t the only big creatures out and about.

It’s Nevada’s big game season and the hunters had tags for the big cats, which are known to follow deer herds that inhabit the region around Genoa.

Residents have also reported bobcats and coyotes getting into the chickens.