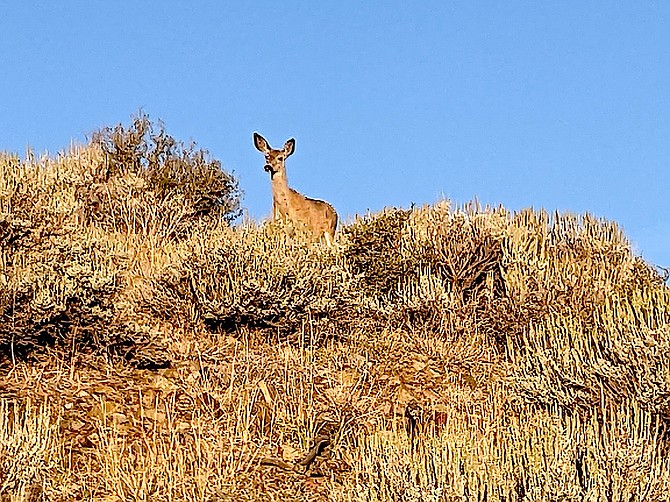 A deer blends in with the background above Topaz Ranch Estates on Friday morning.
John Flaherty | Special to The R-C

Deer and other wildlife are common sights along Carson Valley thoroughfares, requiring motorists to slow down to avoid hitting them.

On Wednesday morning, a motorist said she swerved when a deer jumped in front of her in a 7 a.m. rollover on Muller Lane.

Reports are that one person was transported to Carson Valley Medical Center.

The road was closed for around an hour and then down to one lane until the wreckage was cleared.

The Nevada Department of Wildlife reports the number of bears hit by vehicles is on its way into record territory.

On Saturday morning, there was a report of a dead bear on Orchard Road that was presumably struck by a vehicle.

But deer are the most dangerous large wild mammal in North America, causing thousands of vehicle collisions every year.

The Road Ecology Center at the University of California, Davis, estimates that collisions with wildlife in the Golden State cost $1 billion over four years.

“When including crashes with mule deer that are claimed to insurance companies but unreported to police, the estimated cost could be as high as $2 billion for 2016-2020,” the study said.

During that time, more than 44,000 collisions were recorded by the California Highway Patrol, mostly with mule deer.

While a collision with a deer can severely damage a vehicle, and is hard on the animal as well, swerving to avoid a collision isn’t recommended when overcorrecting can send a vehicle onto its side or worse.