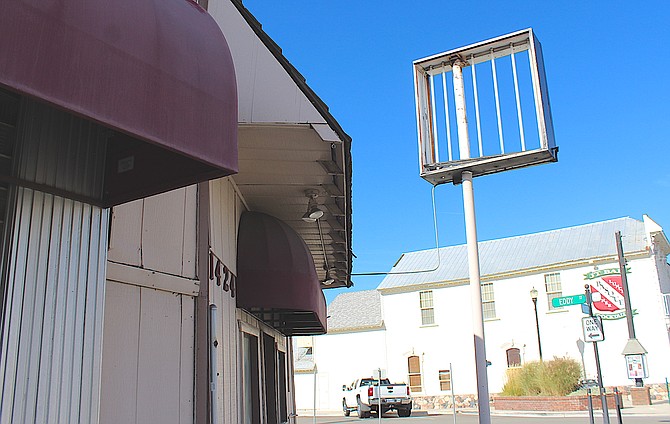 The cream colored Burga building located at Eddy and Main streets in Gardnerville may be on its way to demolition.
Photo by Kurt Hildebrand.

Demolition permits are pending for two buildings located at the corner of Eddy and Main Street in Gardnerville.

The permits dated Wednesday are ready to issue once the fees are paid, according to the county website.

Under the permits, owner Francis Burga will only be allowed to tear down the buildings. He would have to apply for permits to build anything on the site.

Town Manager Erik Nilssen said that obtaining the permit doesn’t necessarily mean the owner is ready to work on the buildings.

The former home of Old Town Antiques hasn’t had a tenant since the property was sold in April 2007. Also on the property is the former Eddy Street Book Exchange, which out more than a decade ago.

According to county records, the structure was built in 1905 after the fire of 1904 burned down that section of Gardnerville.

The same fire claimed the offices of the Gardnerville Record, resulting in its merger with The Courier, whose original building still stands on Eddy Street.

It might have housed the Gardnerville Post Office for a time when it was new. For nearly 20 years from 1980 to the late 1990s it was home to Magoo’s Pizzeria before it became the Bull’s Eye in 1999. By 2003, it was an antiques mall with a variety of occupants before it was sold in 2007.

Meanwhile, across and south down Main Street, demolition of the former Gardnerville laundry is pending the completion of the Section 106 process of the National Historic Preservation Act by the U.S. Environmental Protection Agency.

“We understand the project has taken us longer than expected,” Environmental Scientist Ruben Ramos-Avina said in an email to Nilssen. “However, we assure you and the town that it will get done.”

The laundry owned by the Nishikida brothers was once the old East Fork school and is likely the oldest locally built structure in town.

Built as the East Fork Grammar School in 1876 near where Riverview and Highway 395 are now, the school was closed in 1915 and moved to the S-Curve in Gardnerville. It was purchased by the Nishikidas’ grandmother in 1940, who operated it for 49 years until the state eliminated on-street parking.

The last blow to the structure’s survival came in 2019 in the form of a mini-van that missed the S-curve and broadsided the building.

Ramos-Avina said that the building is eligible for listing on the National Register of Historic Buildings. The state said to compensate for the loss, his office is proposing sending a cultural resources inventory report to the library and putting up a plaque on the Gardnerville Station property.

The face of Gardnerville has changed significantly over the past eight years.

Last month the Gardnerville Town Board agreed to allow the Snowshoe Thompson Chapter of E. Clampus Vitus to place a plaque memorializing the East Fork Hotel.