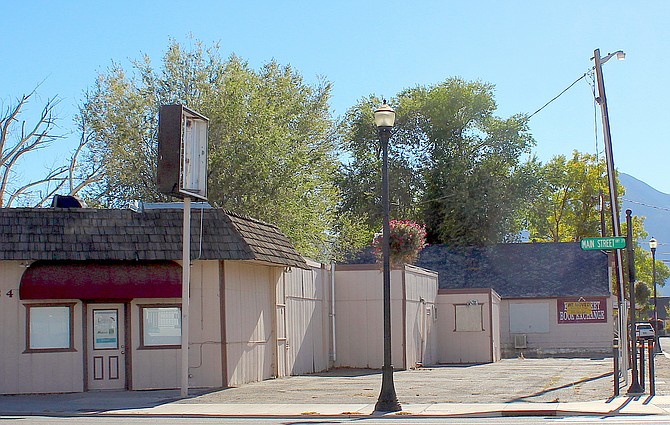 Part of the big building on Main Street across Eddy Street from the JT Basque Bar & Dining Room might be standing on railroad ties and could well be infested with skunks.

Gardnerville Town Board members approved filing a code enforcement action on Tuesday against the building that has been empty for the last 14 years.

The former home of Old Town Antiques hasn’t had a tenant since the property was sold in April 2007. Also on the property is the former Eddy Street Book Exchange, which moved to Minden more than a decade ago.

“Once a property starts to deteriorate it’s very difficult for someone to come in and use that space because its such an investment to get it useable again,” Town Manager Erik Nilssen said.

The town and former Gardnerville Laundry owners Joe and Dave Nishikida have been wrangling over the property two doors down from the town offices for more than two years.

“You can see once the process starts, how long it can take,” Nilssen said. “We have two buildings that could reach the blight level and I don’t see them improving from their current state. If no action is taken, the buildings will look the same they do today and just five years worse.”

One of the early projects for Main Street Gardnerville was to paint it and establish a gallery on the side fronting Highway 395.

“Main Street Gardnerville has improved the building by painting and putting up their sidewalk gallery and it looks pretty good for what they’ve done to keep it from looking obviously blighted,” Nilssen said. “I’m not sure how much longer they can keep the front of the building presentable along Main Street.”

While Nilssen didn’t go inside the structure, he said he doesn’t believe that the roof is keeping water out.

He said that he hasn’t seen any attempt on the part of the owner to market the building.

“It’s got to be pretty well trashed on the inside because the fire department was given permission to do drills inside,” board member Lloyd Higuerra said.

Longtime board member Linda Slater said she recalled an effort to have the building demolished, but that was halted by the county.

According to county records, the structure was built in 1905 after the fire of 1904 burned down that section of Gardnerville and resulted in the merger of the Gardnerville Record and The Courier.

It may well have housed the Gardnerville Post Office for a time when it was new. For nearly 20 years from 1980 to the late 1990s it was home to Magoo’s Pizzeria before it became the Bull’s Eye in 1999. By 2003, it was an antiques mall with a variety of sellers before it was sold in 2007.