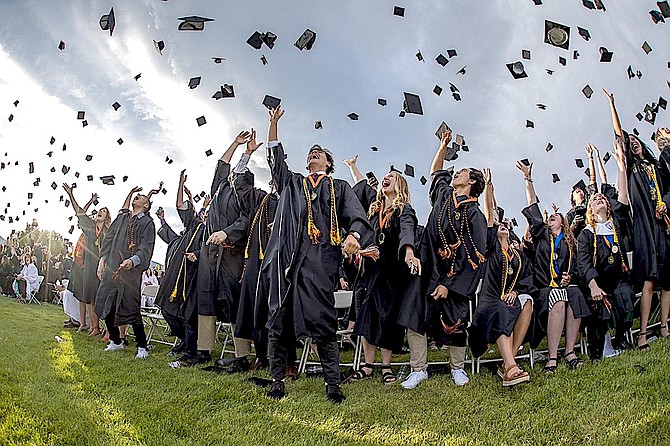 Douglas was tied for 17th with four other large Nevada schools on the Great Schools list of 25 Nevada schools that was dominated by charter, magnet and academy schools.

The top regular district high schools at 15th and 16th on the list are Round Mountain with an enrollment of 66 students and Virginia City with 127 students.

According to the web site greatschools.org, 48 percent of Douglas High’s 1,688 students go on to college, with 19 percent of them having to take some remedial course. That’s a percent off Reno High, but better than either McQueen or Palo Verde.

The Douglas County School District was named the top school district in the state for the second year in a row by niche.com.

The Nevada Department of Education announced that 25 State high schools, including Douglas High School, have received the prestigious College Success Award from GreatSchools.org. It's the nation's leading nonprofit providing school information to parents and families.

Now in its fifth year, the annual recognition honors public high schools that excel at preparing students to enroll and succeed in college, as determined by available data in each state.

Nevada's recipients are among 1,742 winners from 25 states that have demonstrated successful track records of graduating students who enroll in two- or four-year colleges, are ready for college-level coursework, and persist on to their second year. Despite the many challenges brought forth by the COVID-19 pandemic, these schools have continued to uphold many best practices to support their students' college preparation and success.

"Nevada schools are doing an excellent job of preparing students for the future and for moving forward with their education and these awards show that," said Jhone Ebert, State Superintendent of Public Instruction. "I'm proud of all the hard work that's been done by our educators, our students and their families.

The College Success Award is possible because Nevada is leading the nation in both collecting and transparently sharing information on how students perform after high school, which is valuable information for families, educators, and policymakers.

"We applaud Nevada for prioritizing a high-quality public education that puts students on the path to bright futures," said Jon Deane, CEO of GreatSchools. "It's inspiring to see how entire school communities - students, teachers, and families - can work together in pursuit of a common goal: success for all.