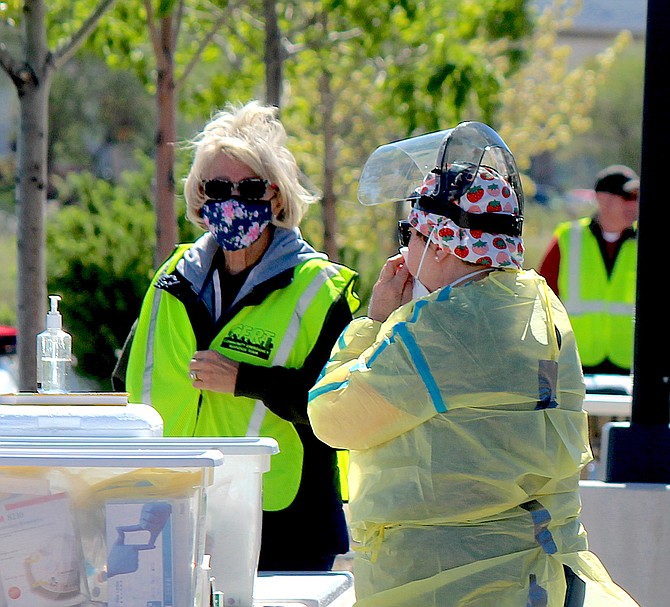 Douglas County school officials are scrambling to revise their plan to open schools on Aug. 9 after Tuesday’s directive by the governor requiring masks for anyone in a public building.

On Thursday, Superintendent Keith Lewis said that the district's attorneys, confirmed the directive will require students, teachers and administrators to wear masks.

"The district will be bringing forward a plan in alignment with the most recent directive, which the Board of Trustees will consider for approval during a special meeting on Aug. 2," Lewis said.

The district already completed and submitted its coronavirus plan required by the state.

Douglas is one of a dozen Nevada counties the state said had an increased rate of spread from the virus.

Lewis pointed out that the school district has always had a lower rate than the rest of the county.

The Nevada Department of Health reports Douglas County has too low an average number of tests per 100,000 and too high a positivity rate.

There are only around 32 tests being conducted every day, below the 50 required to climb out of the criteria.

Mass testing was suspended after residents stopped turning up for events in May, opting instead for a vaccination. Those mass testing events helped keep Douglas above the threshold of 50 for the county.

The county is averaging five new cases a day. According to the Nevada Health Response website, there have been no new hospitalizations as a result of the virus.

In all, 37 Douglas residents have died as a result of the virus since August 2020.

Slightly more than half of the county’s population over 12 years old has been vaccinated, with 22,572 shots administered.

A walk-in clinic is 3-4 p.m. today at the Douglas County Community & Senior Center in Gardnerville. Vaccinations are free of charge.

The new directive goes into effect on Friday and reflects updated guidance issued by the Centers for Disease Control that everyone in counties with substantial or high transmission should wear a mask while in public indoor spaces.

In Nevada, that’s interpreted as meeting at least two of the three criteria set by the state department of health.

The guidance recommends universal masking in schools regardless of vaccination status or level of community transmission.

A group of parents has been consistent in protesting having their children wear masks at Douglas County School Boards.

When the mask mandate was lifted for those who were vaccinated, the district allowed students 12 and older to stop wearing masks, while those who were 9 and younger were exempt from the requirement.

That left a small group of students who were required to wear masks.

Under the governor’s order that age group will be joined by their peers when school starts on Aug. 9.

Parents who are concerned about sending their fourth through 12th grade students to school, either due to the mandate or the possibility of contracting the virus, may still sign up for Douglas Nevada Online.

Welcome to communist America. Vaccines should have been halted after the first 25 deaths. Now we're into the thousands who have died because of the vaccine.