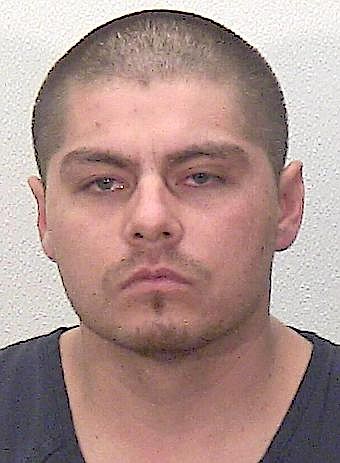 A man convicted of slashing and stabbing the mother of his children was sentenced to 4-10 years in prison on Tuesday.

Tevin Matthew Ahdunko, 28, has been in custody since his May 23 arrest.

He denied the charges and received a three-day trial where the jury convicted him of battery with a deadly weapon with substantial bodily harm on Sept. 22.

“You are a dangerous and violent man,” District Judge Tod Young said. “You have a history of hurting people.”

Prosecutor Chelsea Mazza said the victim told investigators it was the sixth time she’d been stabbed by Ahdunko, though she recanted at trial. Mazza sought the maximum sentence of 6-15 years.

According to court documents, Ahdunko and his girlfriend of four years got into an argument, and he pulled a knife on her, slashing two fingers on her left hand and her right leg.

Attorney Brian Filter sought a suspended 2-5 year sentence, arguing that Ahdunko’s family was in court to support him.

Ahdunko told Young that he’d sought help from the Washoe Tribe but was denied.

“I just want to get our and give my kids something I never had, a father,” he said.

The judge said that the victim in the case wrote a letter seeking probation for Ahdunko.

“It’s obvious she still cares for you and wants you in her life,” he said.

This will be Ahdunko’s second prison term after he was convicted of battery causing substantial bodily harm and sentenced to 14-35 months in Carson City.