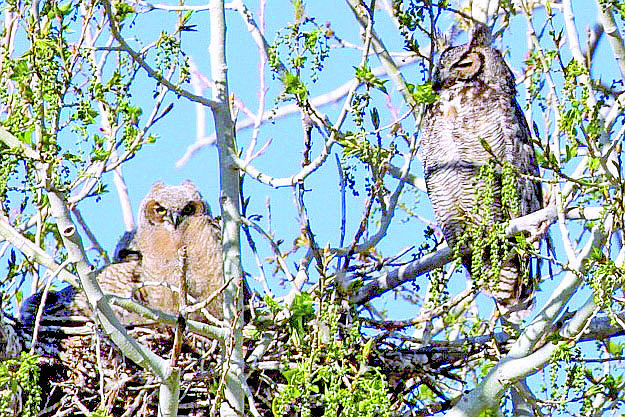 Karen Martell captured a photo of this owl family in Fish Springs on Mother's Day.

Genoa, Nev. — As many as four people were transported from a head-on collision that occurred on Highway 50 at Zephyr Point around 10 p.m. Wednesday night. Tahoe-Douglas firefighters reported there was no fatality. Nevada State Police are investigating

Authorities are asking motorists who see reckless drivers to report unsafe driving. On Monday, troopers arrested an impaired driver in Carson after receiving a call. It’s OK to dial 911 or *NHP if you see someone who is clearly not in control of their vehicle. Who knows? You might save a life.

The Bureau of Land Management is conducting a media event at the Douglas County Fairgrounds around lunchtime today, so that’s what’s going on if you see a bunch of fire gear buzzing around out there.

Gardnerville is rebuilding Bell in town next to the Anker Car Wash. Road work season has definitely arrived. Kingsbury is the biggest job in Douglas County right now and isn’t estimated to be done until June 15.

Sonora Pass is scheduled to reopen at 2 p.m. today leaving only Ebbetts Pass closed for now. Monitor Pass has reopened after the storms passed.

It’s time to finally bid farewell to winter. Today expect partly sunny skies and a high near 63 degrees. The wind will be out of the southwest at 5-10 mph, gusting to 25 mph. The highs will climb around 20 degrees by Sunday.