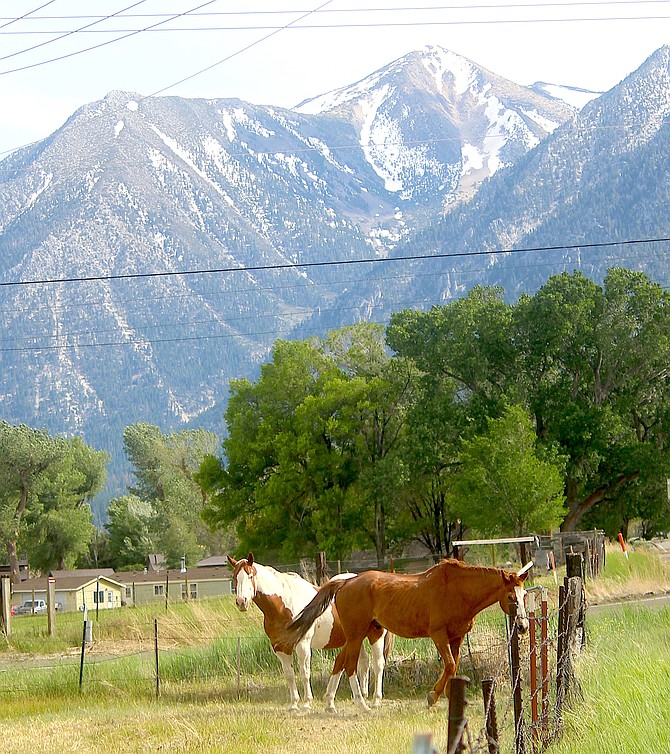 Jobs Peak rises above the horses in the pasture below Van Sickle Station.
Photo by Kurt Hildebrand.

I can't confirm a report that someone snatched cash from a carnival goer waiting to buy tickets on Thursday night. It’s been a while since we’ve had a huge event like this, so be alert to the possibility that someone might want to relieve you of your spending money.

People may be gathering in downtown Gardnerville tonight. Keep in mind that cans and bottles are banned in public spaces within the town starting at 5 p.m. and lasting until morning. Saturday’s Carson Valley Days Parade is not an effective hangover cure.

Unless there’s a big rush to early vote in person today, it’s likely we’ll see around 8,500 ballots cast by the end of the day. The Douglas County Clerk-Treasurer’s Office is seeing an average of 745 ballots a day, with in-person voting account for around a third of that.

As of Thursday night, 7,633 Douglas residents have cast their ballots. Of those, 1,715, voted in person while 5,918 cast the paper ballots they received in the mail. The polls at the Douglas County Community & Senior Center close at 6 p.m. today and will reopen 7 a.m. Tuesday. Paper ballots may be mailed or dropped off on Election Day.

I read an NBCnews.com story this morning on election spending that said Carson Valley resident Dr. Fred Simon one of the top three frontrunners in the Republican race for the nomination for governor. Sheriff Joe Lombardo was listed as first and North Las Vegas Mayor John Lee as second. https://www.nbcnews.com/meet-the-press/meetthepressblog/spending-nevada-governors-race-set-hit-10-million-rcna32531

A UNR poll lists Dean Heller at second place and Joey Gilbert at third, both of whom are trailing Lombardo by 30-plus points. Simon’s at fifth in that pole behind Lee, so take all this with a grain of salt.

heat advisory issued by the National Weather Service. It’s the first heat advisory of the year with the high today forecast to hit 93 degrees in the Douglas County seat.

This old desert rat knows the key to beat the heat is plenty of fluids and staying in the shade. Check on relatives and neighbors and for the sake of humanity don’t leave kids, dogs or the elderly unattended in the car.