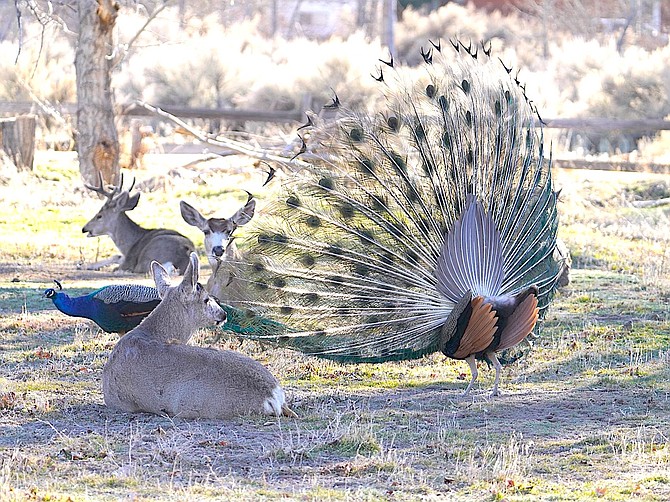 Deer and peacock hang out on a fall day in the Gardnerville Ranchos in this photo by Lori Johnson.

Genoa, Nev. — The driver of what was reported as a window-cleaning van led deputies on a 90 mph chase north on Highway 50 from Skyland to Glenbrook Canyon where it ended in a crash around 6 p.m. Wednesday. Nevada Highway Patrol is investigating. There was not report of injury.

U.S. Senate candidate Adam Laxalt is scheduled to make a campaign stop in Minden Park around 3:30 p.m. Virginia City and Dayton are also on the schedule. He was speaking in Carson City on Wednesday.

Early votes are rolling in at an average of around 1,000 a day between paper and in-person counts. As of end of business Wednesday, the Clerk-Treasurer’s Office reported 5,184 ballots have been cast.

According to the ballot drop-off chart in my sample ballot, the roving ballot box will be at Johnson Lane Fire Station 10 a.m. to 1 p.m. and at Sunridge Fire Station 3-6 p.m. Anyone can drop their ballot off at any of these spots and save the county the cost of postage.

Only one of four Tier 3 permits were approved by the VHR Advisory Committee during a four-hour meeting on Thursday. The permit at 230 Terrace View Drive was the only request to survive. That committee does a great job of keeping spirits up, despite the contentious nature of their job.

The first Trunk or Treat is 4-6:30 p.m. today at First American Title across from the old McDonald’s at 1663 Highway 395, Minden. The calendar has a couple of them if you’re looking, on stands now, only a buck.

Local and state offices are going to be closed on Friday for the Nevada Day holiday, so if you’ve got business with the county, best to get it done today. We will be getting mail that day.

The forecast calls for sunny skies and a high temperature of 57 degrees, with the wind out of the northeast at 5-10 mph this afternoon. It’s going to get cold tonight with the low at 24 degrees.