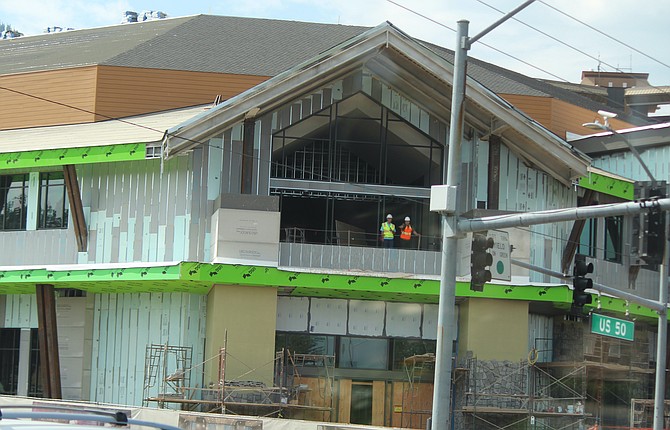 Proponents are hoping completion of the Stateline Events Center next year will help restore the casino core's earning power.
Photo by Kurt Hildebrand.

The chief source of Douglas County’s gaming revenue ended the fiscal year down $23 million, according to figures released last week by the Nevada Gaming Control Board.

Douglas not only receives taxes from casinos based on the win, but casinos’ property taxes are generated based on their revenues.

Casinos in East Fork and Carson City townships, which are combined for the monthly revenue report were up 1.52 percent to $11.2 million. Those casinos were up 10.2 percent for the year to $127 million.

While Douglas merchants posted a more than $20 million increase in taxable sales in May over the same month in 2021, it wasn’t due to the usual suspects.

Some of the county’s larger sectors, like food services and drinking places or retail sales, were actually down for the month perhaps reflecting inflation concerns.

Long one of the strongest categories, thanks in part to the Stateline casinos, food services and drinking places shrank 3.1 percent to $10.1 million, and was essentially flat for the year at $112 million.

Amusement, gaming and recreation was down 12.2 percent in May at $2.88 million, while accommodations were up 11.2 percent to $3.3 million.

General merchandise stores dropped 1.7 percent to $10.49 million for the month, as miscellaneous retailers saw a 14 percent decrease to $2.39 million.

A typically quite category, construction of buildings, saw a nearly 1,700 percent increase to $1.75 million in May. With only seven outlets, the month by itself accounted for 77 percent of 2021’s year to date total.

And that wasn’t an unusual story across the figures released by the state on Friday. Machinery manufacturing was up a factor of five to $1.31 million. Merchant wholesalers of durable goods was the third largest sector with $9.5 million, compared to a $3.9 million chargeback in May 2021.

Miscellaneous manufacturing more than tripled last year’s sales during May with $2.16 million.

Results from June won’t be available until the end of August. That report will also provide results from the last fiscal year that Douglas was guaranteed financial support from the state based on its population. Starting July 1, the county’s sales tax revenue is based entirely transactions conducted within its boundaries.