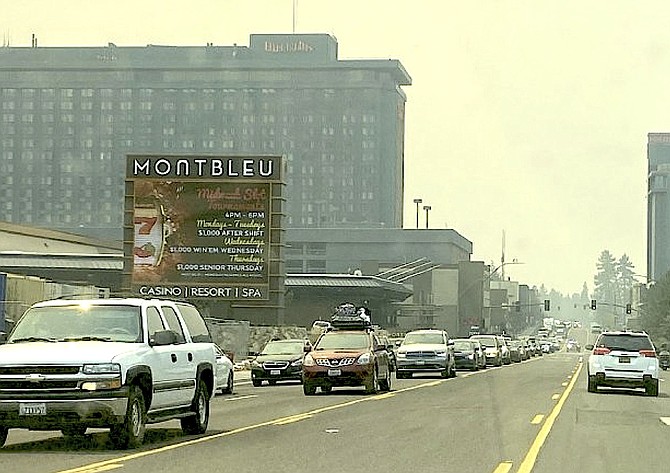 Evacuees pass through Stateline ahead of the Caldor Fire in this Aug. 31 photo.
Bill Rozak | Tahoe Daily Tribune

Stateline casinos were still recovering from the effects of the Caldor Fire during October and even a big drink of water from an atmospheric river wasn’t sufficient to fully overcome the hangover.

The casinos, which generate the majority of Douglas County’s revenue from gambling, brought in $16 million during the month a decrease of 25.8 percent from October 2020, according to the Gaming Control Board.

After posting two strong months in July and August, the closure of Highway 50 for the Caldor Fire and the evacuation of South Lake Tahoe and Stateline, pulled back the reins on what was expected to be a strong year.

Stateline and North Lake Tahoe were the only places in the state to report negative gaming numbers during October. The casinos in Washoe County’s portion of Lake Tahoe reported a 2.89 percent decrease over October 2020.

Casinos in East Fork and Carson City townships, which are combined for reporting purposes, posted a 14.33 percent increase to $11.5 million. They reported $45.9 million in revenue so far for the fiscal year that started July 1.

In addition, the casinos pay property taxes based on their revenues as opposed to the value of their property.

Douglas County experienced a rare blip in taxable sales during September, with a 3.1 percent decrease to $81.6 million.

Accommodations, food services and drinking places and gaming all experienced big decreases, thanks largely to the closure of Highway 50 during most of the month.

Historically one of the county’s largest categories, food services and drinking places, was down 23.3 percent compared to September 2020, to $8 million. Accommodations were down 37.5 percent and amusement, gambling and recreation was down 55.2 percent.

General merchandise stores, which include the county’s two Walmarts and a Target, were down 1.9 percent to $9.88 million. Electronics and appliance stores saw a 69-percent decrease from $7.9 million in September 2020 to $2.47 million this year.

Nonstore retailers posted a 13.7 percent gain, bringing in $8.3 million during the month.

Building materials and garden equipment and supplies were up 4.8 percent to $6.4 million, seeing the continuation of the county’s construction boom, as evidenced by the building construction sector, which saw a nearly five-fold increase from $199,528 to $1 million.