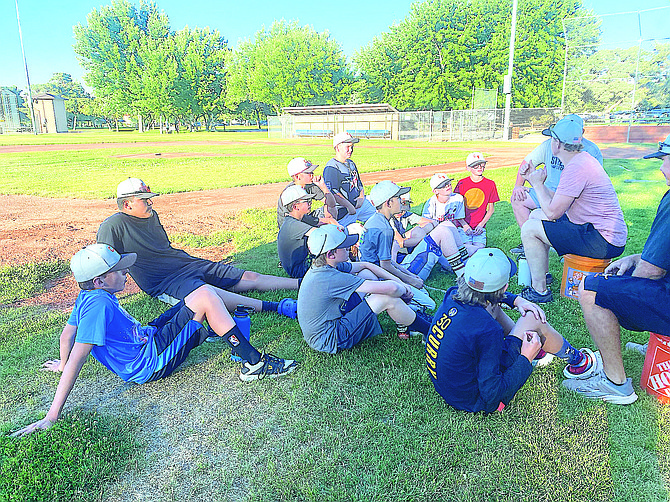 12U team members listen to their coaches after practice on Thursday.

For the first time in 24 years, Carson Valley Little league has not just one but two teams heading to the state tournament.

Both the 12U and Juniors All-Star teams are heading to Las Vegas next week to compete in the tournament after both teams won the Nevada District 1 title.

Carson Valley fans showed out during the D1 tournament for the teams.

“The entire outfield was filled with people from Carson Valley, our side was spilling over,” said Communications Director Amy Pearson-Gomez. “It wasn’t just baseball families, there were people from the community who came to watch.”

The Junior’s team seeded highly in the D1 tournament after securing second place for all Junior’s teams in the regular season. This guaranteed a bye in tournament play leading the team to need to win two games. The Juniors outscored their opponents 30-6 in the tournament and locked in their ticket to state.

“We plan to get up there and put up a great fight,” said Nolan Pablo.

Juniors team Head Coach Greg Nichols said that he has been confident in this team all along.

“When we first started this, I told them that they can beat any team out there if they really want it,” said Nichols.

In addition to Nichols, the Juniors are coached by Scott Jenkins and RJ Aqui.

The team said they faced adversity over the last season after combining to create the All-Star team they are now.

“It was tough playing with each other after being on different teams, but at the end we are here,” said player Jake Surane.

The 12U team had to play in two tournaments to get to this point. They went 5-0 in the first tournament and went 4-0 in the second tournament to reach the championship game. The team then played a hard-fought game against Washoe winning 1-0 to punch their ticket to state.

“We had to work harder,” 12U players said. “We weren’t expecting what Washoe threw at us.”

12U Head Coach Trent Tholen said teamwork has played a huge roll in their success.

“It really came down to this team and these guys working together and being there for each other to win ball games,” he said.

The 12’s said that they are thrilled to be able to go to state and are ready to play for the community.

“I’m most excited to go and represent the Carson Valley and show them what we are made of,” said player John Polish.

The Junior’s team will be holding a fundraising car wash 9 a.m. to noon today. They will also be holding a Homerun Derby 6 p.m. today at Lampe Park.

All donations and money raised will help the teams with travel expenses, lodging and player needs.