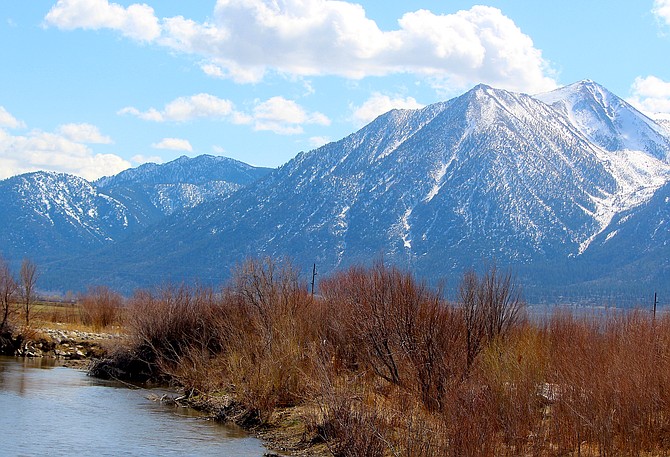 Jobs Peak rises above the East Fork of the Carson River on Monday afternoon.
Photo by Kurt Hildebrand.

The eastern Sierra has experienced the driest 18 months in a third of a century.

The only time in the last 40 years that there was a drier year and a half wrapped up on April 1, 1988, during the seven-year drought that extended from 1986 through 1993.

Natural Resources Conservation Service Hydrologist Jeff Anderson said Monday there isn’t much indication that things will turn around in April.

He pointed out that last year saw some wet storms right after the ski resorts closed, but that there’s nothing like that in the current forecasts.

“We had some pretty good runoff efficiency,” he said. “This year for a variety of reasons the southern aspects have already lost their snow, and there’s really dry soil under the snow.”

He said those two things combined will result in part of the snowpack soaking into the soil before it starts to run off.

“Dry soil acts as a sponge as the snow begins to melt,” he said. “The soil profile needs to fill before runoff is most efficient.”

Things would be quite a bit worse if not for the big Jan. 27 storm that blasted the Walker and Carson river basins.

“We’re looking at a pretty dry forecast ahead,” he said.

The Conservation Services streamflow forecast indicates that Lake Tahoe will only rise a half foot this spring, or 38 percent of average.

Irrigation season on the Carson started on April 1.

The U.S. drought monitor has Douglas County in severe drought as of April 1.

Precipitation in the Carson Basin was 62 percent of average since the beginning of the water year, which is the ninth lowest since 1981.

Conditions in central Nevada, where the drought is at its most severe, prompted a red flag warning for extreme fire danger on Monday.

The last moisture recorded in Minden was on March 19. The forecast doesn’t contain any precipitation through mid-April.