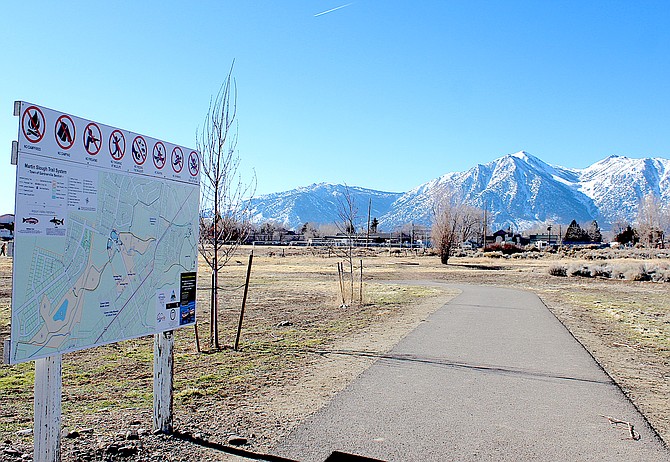 Work on the Martin Slough Trail is expected to start soon.

Eighteen Gardnerville homeowners attended a Jan. 12 meeting with County Engineer Jeremy Hutchings to find out about the future of the Martin Slough Trail.

The $1.8 million project got its final green light on Thursday as commissioners approved a budget augmentation of $659,744.

That money will come from the general fund and the greater than anticipated state consolidated tax revenues, according to Chief Financial Officer Terri Willoughby.

Resident Julie Duda said homeowners met with Hutchings at the site of the future trail to ask about protection of wildlife during construction, restoration of site following construction, access to existing trail during the project, exact trail placement, and where the construction will begin.

“A request for project progress reports to be posted on the county website is being considered by staff,” Duda said. “Meeting entertainment was provided by a small flock of geese coming in for a landing on Mountain View Pond.”

Residents thanked Hutchings for coming to the meeting. The project is scheduled to start soon and be completed in June.

Work is underway on the Seeman Ranch Pond park on the Minden end of the trail where new restrooms will be installed this month or next.

The rest of the project is being paid for through Question 1 funding.

Last week, the Nevada Department of Conservation and Natural Resources launched the next phase of the Question 1 program approved by voters 20 years ago.

Formerly known as the Conservation and Resource Bond Program, the new and expanded program will be known as “Conserve Nevada.”

A statewide virtual listening session is scheduled for 6 p.m. Feb. 10 through Microsoft Teams. Participate by clicking here to join the video meeting.

Under Assembly Bill 84 passed by the Nevada Legislature in 2019, Conserve Nevada is a continuation and renewal of the State’s original conservation bond program enacted in 2002.
Through the Conserve Nevada program, $217.5 million in bond proceeds will be leveraged over the next decade as follows:

• $77.5 million in grants to nonprofits, local and county governments, and other agencies for projects to enhance recreational trails and facilities, acquire and protect environmentally sensitive land, improve river corridors and watersheds, improve wildlands to reduce fire risk, and protection of Nevada’s historic and cultural resources.

• $60 million will be provided to the Nevada Division of State Parks and Nevada Department of Wildlife for improvements to wildlife habitat, wildlife facilities, and Nevada’s State Parks. For more information, visit http://dcnr.nv.gov/divisions-boards/conserve-nevada