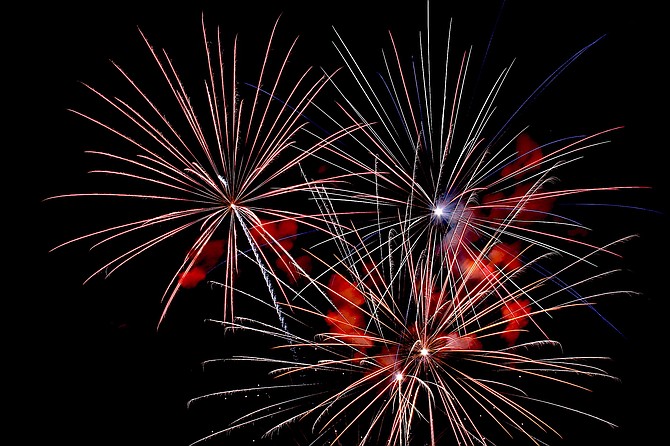 Weather was perfect for fireworks in 2021, but might be a little trickier this year.
Photo by Kurt Hildebrand.

As of 10:30 a.m. Thursday, Gardnerville Town Manager Erik Nilssen said the town is still planning on its fireworks show.

While there may be rain or snow in Heritage Park, as long as the wind isn't above 20 mph the fireworks may still be launched.

The wind seems to be dying down as precipitation arrives, so that may work in the show's favor.

The key question this week is whether fireworks or snow will be a more apt opening to Carson Valley’s Christmas celebrations.

December and the season both start on Thursday with Gardnerville’s Christmas Kickoff and there’s a chance of snow in the forecast, though that won’t necessarily preclude the fireworks.

“We will have our fire globes providing warmth, but the forecast is (for a) chance of rain or snow – dress warm,” Town Manager Erik Nilssen said.

Gardnerville has made a tradition of fireworks in Heritage Park as part of the first celebration of the season’s arrival, only skipping in 2020 during the coronavirus outbreak.

But weather could still be a factor with the wind forecast to die down around 7 p.m. Thursday.

The warm-up for the fireworks are All About Dance, Dance Workshop and the Douglas High Choir, which begin at 5:30 p.m.

Santa arrives at 4 p.m. and there will be horseless carriage rides around the park.

Fireworks are tentatively scheduled to go off between 6-6:30 p.m. depending on the live performances and the wind.

Santa has another appointment and is expected to head out around that time. Sharkey’s and Randy and Linda Slater are the sponsors for this year’s fireworks.

Cobbler, hot chocolate and cider are on the menu and the Gardnerville Water Co. will be popping corn.

The pavilion light show will also be unveiled and will run nightly through New Year, according to Nilssen.

The wind won’t be a hindrance on Friday when Minden conducts its annual gazebo lighting and Genoa hosts caroling at the Town Church before lighting Hope Falcke’s Christmas tree.

Minden’s celebration starts at 5 p.m. and will feature firepits and s’mores, cookies from the Carson Valley Inn and live music by the Douglas High School Dynamics.

Children who bring a canned good to donate will receive a goodie bag and a chance to help Santa throw the switch on the gazebo at 6 p.m.

Over in Nevada’s oldest town, Genoans will be singing in the Town Church starting around 5:30 p.m. and then, filled with Christmas spirit, will walk down to the corner of Nixon and Main streets for the tree lighting.

If you missed Santa anywhere along the way, he’ll be back in Genoa on 8:30 a.m. to noon Saturday for breakfast.

The climax of this week’s Christmas celebration comes Saturday evening when the Parade of Lights takes over downtown Gardnerville and Minden.

The parade leaves Heritage Park at 5 p.m. and jogs over to Eddy Street before wrapping up at Minden Park around 8 p.m.

The theme for the parade, which Chamber Executive Director Alicia Main said has 65 entries, is Candy Cane Christmas.

Highway 395 will close around 4:30 p.m. at Waterloo Lane and Buckeye Road. Both Waterloo and Buckeye will be open to bypass the parade route. However, side streets all along the route will be closed.