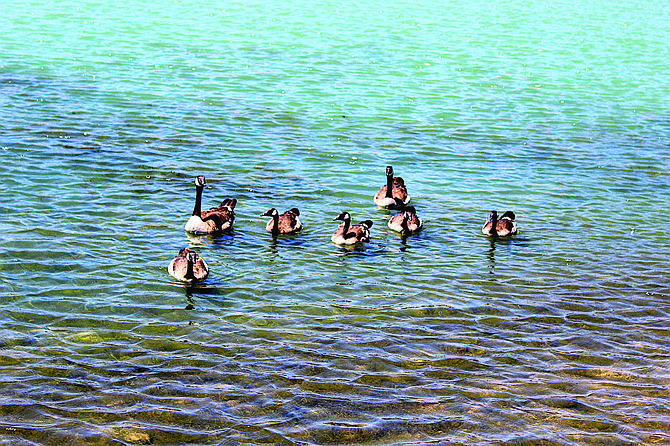 Geese paddle along the surface of Mountain View Pond in Gardnerville on Wednesday.
Photo by Kurt Hildebrand.

Around 50 people signed a petition asking the Gardnerville Town Board to ban special events or noise-generating activities for the next two years on the Mountain View Nature Park Pond.

Gardnerville Town Board members are scheduled to discuss the petition at their 4:30 p.m. on July 5.

Town Manager Erik Nilssen pointed out that the pond didn’t exist before the winter of 2018 when it was excavated.

The petition is in response to further work on the pond that occurred in December 2021 to complete the pond to its current dimension.

“A separate project to enhance the open space by providing a 2.5-mile multi-modal trail has recently been completed,” Nilssen wrote in his report. “This trail, which runs adjacent to the pond brings an increased number of residents to the area than had previously used the open space.”

Nilssen pointed out that the park is an urban park, and not a protected wildlife refuge area.

“The goal of the urban park is to provide recreational opportunities for town residents, but it does not prioritize wilderness over access or amenities.”

Under an open space master plan for the park’s improvements, the area will remain in its semi-natural state, but the plan also encourages users.

Nilssen questioned what special events might be subject to the prohibition should it be approved by the town board.

He has the authority for events of up to 250 people with no amplified music or alcohol, but anything larger than that would require the town board to act. Any event with 500 people or more are required to obtain an outdoor festival permit, which has to be approved by the town board and county commissioners.

In the four years the pond has existed, there haven’t been any special events proposed nor has it been used commercially. Nilssen doesn’t anticipate frequent or intrusive events anytime soon.

What he does anticipate is the possibility that at some point residents may find themselves seeking to shoo wildfowl away.

“Other areas within Douglas County, such as Lampe Park and Winhaven are saturated with waterfowl to the point where they interfere with the use of the park due to droppings,” he said. “In the future the discussion may become how to encourage the waterfowl to move on, not how to attract more to the area.”

The only scheduled event that will come close is the dedication of the Martin Slough Trail scheduled for Aug. 20 that will start at the Seeman Pond in Minden and end at Heritage Park. The event was already approved by the town board.

One proposal for the pond is to stock it with fish, which would attract anglers. The Nevada Division of Wildlife told Nilssen they’re excited to add the pond to the list of urban fisheries.

As of Wednesday, the shores of the pond were covered by scattered low scrub with a few trees that were planted Arbor Day 2021 by Boy and Girl Scouts.

Landscaping for the pond would eventually include mature trees and an entrance off Snaffle Bit.