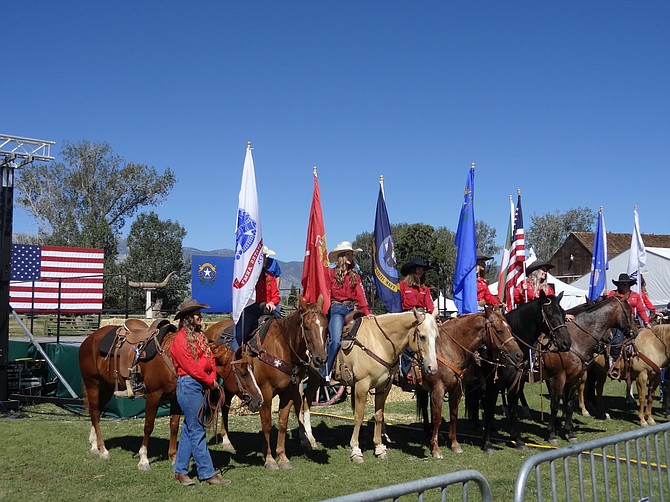 The colors arrive on horseback at the Basque Fry on Corley Ranch that occurred on Saturday. Photo special to The R-C by Ellie Waller

Cruz grabbed the most attention as the day’s final speaker to the crowd estimated between 1,500-2,000. The second-term senator from Texas is supporting former Nevada Attorney General Adam Laxalt in his candidacy for U.S.

Laxalt, who served in the Navy’s judge advocate general in Iraq said his opponent, Catherine Cortez Masto, is the most vulnerable senator in America who’s seeking re-election.

Laxalt succeeded Cortez Masto in 2014. He left the office to run for governor but was defeated by Steve Sisolak in 2018.

Noem, who was introduced as a rancher, farmer, small business owner, best-selling author and first female governor of South Dakota, said Laxalt invited her to the Basque Fry.

When Noem made her decisions on her state’s response to the coronavirus pandemic in March 2020, she explained how she formulated her response.

Noem said her family tried to resume the ranch’s operations, but the family owed thousands of dollars to the IRS. From that problem with the federal government, Noem began to forge an interest in serving her state, first serving in the legislature and then as a congresswoman for four terms. She then opted to run for governor.

“I won governor by 3 points against a Bernie Sanders guy,” said Noem, who’s running for re-election this year.

Noem took the opposite of Nevada Gov. Steve Sisolak, who initially closed the entire state down except for essential businesses. She said her administration did research and talked to experts on how other countries were handling this new virus. Noem said her goal was not to overstep, and as a result, she pointed out South Dakota was the only state that didn’t close a business during the pandemic. Additionally, Noem said her administration rejected federal government employment benefits because South Dakotans were working.

“In South Dakota, we have the best economy in the nation,” she said, adding income is growing faster than the other states.

Lombardo said Sisolak doesn’t seem to care about the state, especially with the residents’ safety and the governor’s wrong direction in supporting law enforcement.

“Law and order affects the economy, affects your kids’ education and the ability to have a nice quality life in the State of Nevada,” he said.

Lombardo, who defeated runner-up Joey Gilbert by more than 25,000 votes, took a veiled swipe at the Reno attorney.

“I came out of a very contested primary race,” Lombardo said, alluding to the elephant in the room. “We had a lot of qualified guys running for the Republican ticket for the seat of governor. We have to come together since then.”

Lombardo said it’s vital for the Republicans’ success in the fall elections to do their part and come together to support the candidates.

Rep. Mark Amodei, Nevada’s lone Republican in the state’s congressional delegation, said the voters have spoken in the primary election. He also urged the crowd to support the Republican candidates running for the House of Representatives in Southern Nevada.

The Carson City native said 15 of the state’s 17 counties voted for Trump, while Washoe County was 50/50.

Gardnerville residents Frank and Susan Dutra said this is the second year they have attended. He said Ted Cruz was very motivational.

“It’s good to see some leaders, some potential leaders, who can turn this country around,” he said.

“People can relate to her because of her rural roots,” she said.