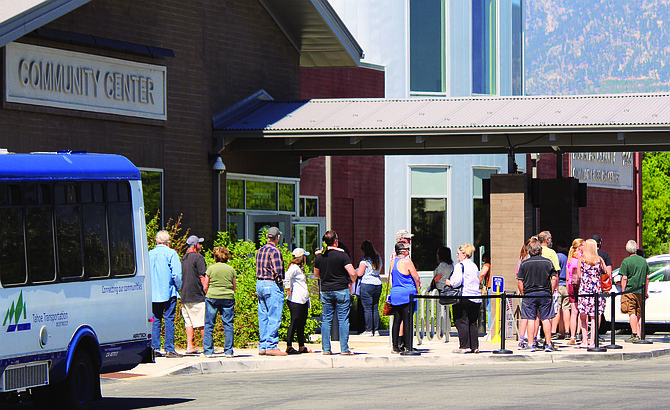 Voters in line outside the Douglas County Community & Senior Center around 10:30 a.m. Tuesday.

As of midnight, nine of Nevada’s 17 counties have reported election results, including Washoe, the second most populous county in the state.

Washoe is also the largest county in the Second Congressional District, where incumbent Rep. Mark Amodei is polling 55.93 percent of the vote against challenger Douglas County Commissioner Danny Tarkanian.

While Reno attorney Joey Gilbert had a strong showing in the rural counties in the race for governor, Washoe voters came out for Clark County Sheriff Joe Lombardo 33.73-29.97 percent.

Results could change depending on the status of paper ballots. Washoe reported a total turnout of 10 percent among its 312,307 active voters.

Update: As of 11 p.m., seven of Nevada’s 17 counties had reported election results.

Carson City, Churchill, Elko, Humboldt, Mineral, Nye and Storey, are listed on the Secretary of State’s web site at https://silverstateelection.nv.gov/county-results/

No results have been reported by Douglas or Lyon, according to the Secretary of State’s Office.

About 75,000 active Republicans live in those counties, where Reno attorney Joey Gilbert had a strong showing in early results for the Republican nomination for governor.

Carson City is reporting Gilbert is beating out Dean Heller in the race to challenge Democrat Steve Sisolak in the general.

Elko, which is the largest pool of voters among the “cow counties,” has Gilbert leading Clark County Sheriff Joe Lombardo by 20 percentage points.

Gilbert is also polling ahead of Heller in Churchill County.

Rep. Mark Amodei appears to be making headway in defeating a challenge from Douglas County Commissioner Danny Tarkanian in the early results.

Both Carson and Elko are reporting Amodei with better than 50 percent.

However, the largest pool of Republican voters in the Second Congressional District live in Washoe County, which has yet to report.

A line of voters developed outside of the Douglas County Community & Senior Center around 10 a.m. Tuesday.

A computer glitch slowed down electronic voter check-in on Tuesday

“The electronic check in system that we typically use was not working temporarily but we were still able to check people in manually,” Clerk-Treasurer Amy Burgans said.

Voting was otherwise steady in the first hour at the Douglas County Community & Senior Center.

According to the Nevada Secretary of State’s Office, 11,235 voters cast a ballot in Douglas County either in-person or via paper ballot.

More than 80 percent of the 2,129 in-person early voters were Republicans, who also accounted for around half of the mailed ballots.

Mailed ballots were popular with Democrats, but the turnout was fairly low overall. The same could be said for nonpartisan voters.

Because Nevada has a closed primary system, only Republicans and Democrats may vote in partisan races from U.S. Senator down to county commissioner.

On Tuesday, candidates and their supporters conducted last-minute campaigning before the polls close at 7 p.m.