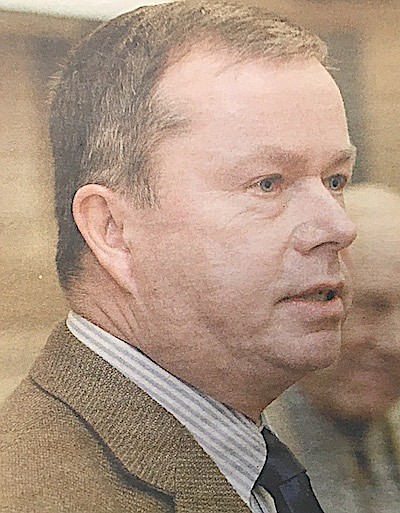 The man likely to be the last East Fork constable will be wrapping up his office sooner than anticipated after Douglas County commissioners appointed Paul Gilbert as East Fork Justice of the Peace on Thursday.

Gilbert will serve out the term vacated by the death of East Fork Justice of the Peace Cassandra Jones. A service for Jones is scheduled for 4 p.m. Aug. 13 at the Douglas County Community & Senior Center.

The only concern expressed by the board was whether Gilbert planned to seek election to the office in 2024.

“I currently have 42 years in Douglas and my intention was to retire,” he said. “I did not seek this office and right now I have no intention of going through an election.”

Commissioner Wes Rice, who served in the Tahoe Constable’s Office, pointed out that Gilbert had to be talked into taking the position.

Gilbert has served as Justice of the Peace Pro Tem in East Fork for 35 years and has presided over cases for decades. That work became more intense in the last year as Jones battled the cancer that would eventually claim her life.

Commissioners were presented with three options on Thursday, either conduct a search for a new justice of the peace, hold a special election or appoint someone.

Rice said a search was something he contemplated.

“I know there are several very qualified attorneys who are interested in the job, and knowing that Gilbert has no intention of running, it’s not fair to give anyone a leg up by being the incumbent,” Rice said. “Let the people of Douglas County decide.”

In Nevada's rural counties, justices of the peace are not required to have a law degree, though the last two to hold the seat have been attorneys.

Clerk-Treasurer Amy Burgans said it is too late to include the office on the November ballot. Holding a special election could cost $130,000-$150,000, which has not been budgeted.

Had commissioners decided to hold a special election to fill the position, whoever won would be required to run again in 2024.

The last East Fork justice of the peace appointed by commissioners was Tom Perkins, who served until 2018.

Gilbert is required to resign as constable by Aug. 26. The office would have gone away at the end of the year after commissioners approved making Sheriff Dan Coverley the ex officio constable.

The office of justice of the peace office will be up for election in January 2024.