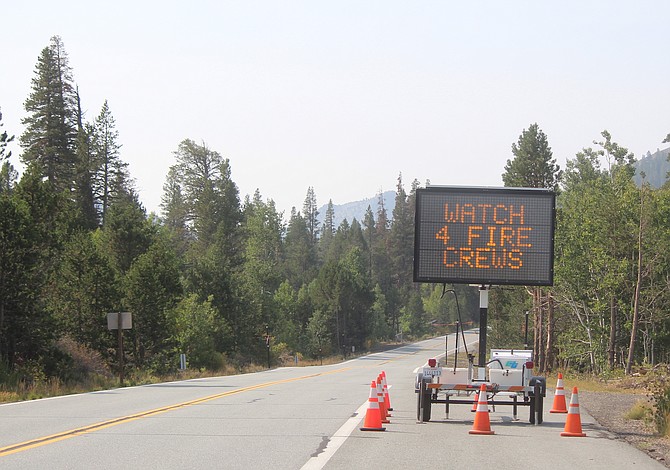 Firefighters plan to conduct counter fire operations in the coming days in the region north of Caples Lake in an effort to stop the Caldor Fire from spreading further east toward the Sierra Crest.

“In an effort to reduce the potential for fire spread towards Christmas Valley and Alpine County; multiple, Interagency Type 1 Hotshot Crews have begun arriving to support a planned strategic firing operation,” officials said Wednesday evening. “Removing this vegetation will allow the crews to introduce low intensity ground fire which will remove available vegetation ahead of the main fire.”

In preparation, crews have been building dozer lines in order to contain the fire within the new perimeters.

The fire closed the gap between Strawberry Creek and Lake Margaret as it burned through the night.

Known as Division Quebec, the area northwest of Caples Lake has been causing firefighters concern and sending smoke into Carson Valley.

“For the past several weeks, crews have been working in the Convict Meadow, Lake Margaret, and Caples Drainage areas in Division Quebec to construct handline near the fires edge,” officials said. “Steep, rocky terrain has made progress slow as personnel work with hand tools trying to clear vegetation between natural barriers.”

There are 65 miles of uncontained fire perimeter, mostly in the region around the Caples drainage.

The fire’s resurgence has prompted the City of South Lake Tahoe to postpone a celebration of firefighters scheduled for Saturday as South Lake Tahoe and other regional fire agencies work on the fire.

Air quality in Carson Valley is moderate this morning, with drift smoke coming from both the Caldor Fire and further south where fires are burning near Sequoia National Forest.

Visibility dropped to four miles on Wednesday afternoon at Minden-Tahoe Airport before the winds picked up and forced most of the smoke in the Valley south along the mountains as a cold front passed through the Valley.

Cooler temperatures and a shift of the winds to the east is in the forecast for today with another cold front expected to arrive Monday that could bring some precipitation to the fire.

For more about fires across the region, visit https://inciweb.nwcg.gov/