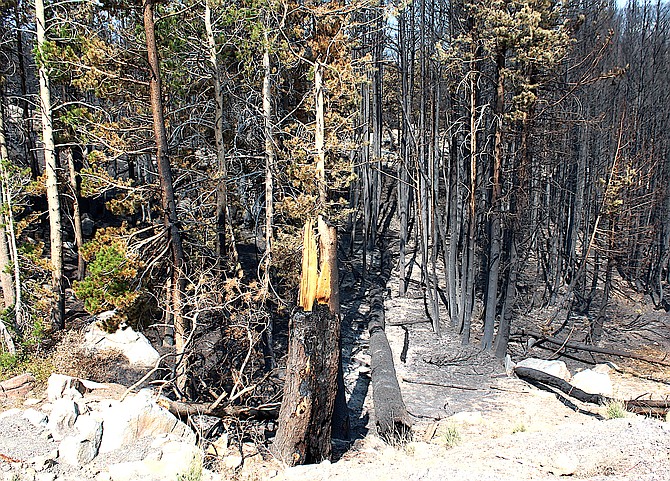 The Caldor Fire burned right up to Caples Lake dam along Highway 88.
Photo by Kurt Hildebrand.

Genoa, Nev. — There was a lot of work required to clear just five miles of Highway 88 affected by the Caldor Fire, so I wouldn’t expect the more than 27 miles of Highway 50 to open for a while. I drove to Kirkwood on Thursday morning and as I was taking photos of the damage at Caples Lake dam a smoke plume rose on the hill to the northeast within the fire perimeter.

With critical fire danger in the forecast for the weekend, firefighters are improving hand and dozer lines around the fire to keep it caged when gusty winds start rattling the bars.

Happy Citizenship Day, which is kicking off Constitution Week, under proclamation of Douglas County commissioners.

The Douglas County Sheriff’s Office K-9s will be at Partnership Douglas County’s Bark in the Park 4-7 p.m. in Heritage Park. The K-9s are funded through donations, so if you can’t make it to Gardnerville tonight, you can find out more at sheriff.douglascountynv.gov/divisions_and_units/patrol_division_units/k-9.

County commissioners approved the revised VHR ordinance on Thursday. Gardnerville resident Patti Graf will join Michael Sloan, Lauren Romain, Keith Byer and Mickie Hempler on the VHR advisory committee. Whether approval of the committee and the ordinance settles the federal lawsuit remains to be seen.

NV Energy is bracing for this weekend’s weather with a public safety outage watch set for Sunday. A company spokeswoman said they’d have a better idea today of what will happen over the weekend.

A fire weather watch issued for 1-8 p.m. Saturday has yet to be upgraded to a red flag warning, which could be a good thing. If this front comes in low and slow, we might actually see some precipitation.

The air quality is in the moderate range across the Valley this morning. It’s cloudy out, but that is forecast to clear today ahead of a cold front due to arrive over the weekend. The high is forecast to hit 85 degrees.