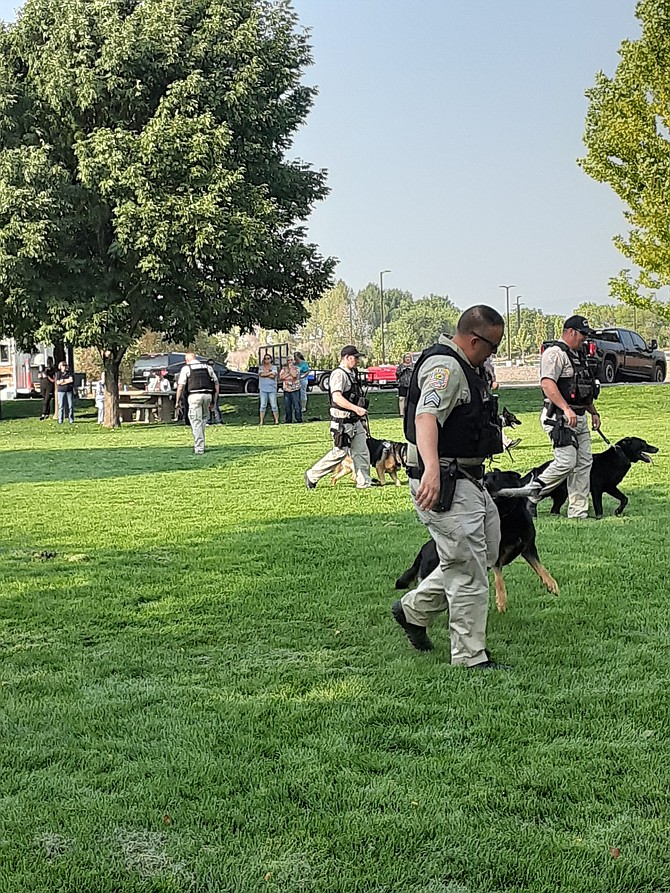 Kathy Schuman took this photos of deputies and K-9s at Bark in the Park on Friday evening.

Genoa, Nev. —There’s a red flag warning for the west slope of the Sierra through 8 p.m., including most of the Caldor Fire area. Firefighters have been building hand line in an effort to contain any potential flare-ups, though northeast winds will push much of the eastern portion of the fire will burn back onto itself.

The impending opening of Highway 50 may result see a little less traffic on our side of the mountain. The Sequoia fires down south are still burning, but the north wind deflected most of the smoke from the Carson Valley.

There are still 92 seats available for Saturday’s Candy Dance dinner in Genoa Park, including five 1919 Society tickets and 87 of the less expensive tickets. As the week wears on expect Nevada’s oldest town to get busier and busier as preparations for the return of the annual fundraiser continue.

It’s chilly this morning, though not quite freezing out as of 6:40 a.m. Minden Tahoe Airport is showing 34 degrees while up on the bench, it’s 40 degrees in Genoa and 38 in the Gardnerville Ranchos and Johnson Lane.

Wednesday is the last day of summer, so of course it will warm up by Thursday. Today expect sunny skies with a high of 73 degrees. Tonight’s low is expected to hit 36, depending on where you are in the Valley.

Kurt Hildebrand is editor of The Record-Courier and is watching the mercury very closely in order to save his tomato plants.