Caldor Fire on the ropes, but firefighters wary of weekend weather 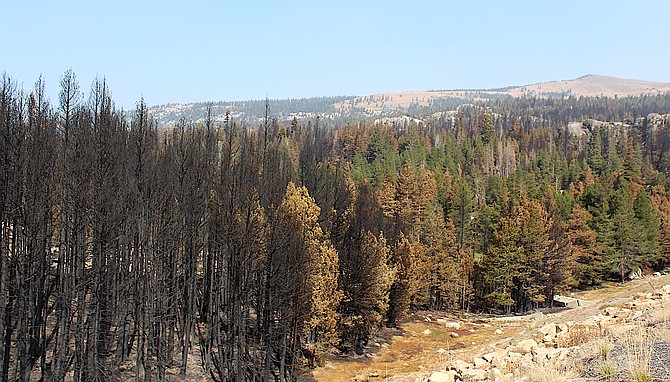 More than 17,000 hazard trees must be taken down before roads through the fire are safe to travel.

The air smelled of Christmas as evergreen branches were piled up for mulching on the south side of Highway 88 near Caples Lake on Thursday.

The highway reopened late Thursday afternoon as firefighters continue to cut line and respond to smoke plumes around the southern portion of the Caldor megafire.

The fire burned right up to Caples Lake dam, but Kirkwood was still standing. Besides the haze and a firefighting base on the western end, a casual observer couldn’t tell a 342-square-mile fire was smoldering just over the ridge from Hope Valley, where the aspens are starting to turn. The acreage on the fire was revised downward by 410 acres to 218,857 due to better mapping.

"We will continue to work on the Desolation Wilderness, Echo Lake, Lake Margaret, Caples Creek and around Kirkwood Ski Resort as well as other areas where fire remains present," officials said on Friday morning. "Weather will be a challenge for firefighters over the next couple of days aw we enter a fire weather watch on Saturday."

Though the Caldor Fire never burned a single blade of grass in Douglas County, its impact on the county will likely be felt for months.

There is no estimate for reopening Highway 50, which closed Aug. 20 as the fire burned in the American River canyon.

Closing Highway 50 affects both room tax and gaming revenues for Douglas County, which helps fund both Douglas County Parks and Recreation and the Douglas County Public Library. Room taxes are also used to fund both chambers of commerce and the Lake Tahoe Visitors Authority, under state law.

The Douglas County Community and Senior Center was closed for two weeks to serve as an evacuation center for South Lake Tahoe.

El Dorado County sought closure of the center on Aug. 21 as the fire burned threatened to burn up to Echo Summit.

“For seven days, this building sat empty under their order waiting for evacuation happen,” Community Services Director Scott Morgan said last week. “Once it started, we filled up in seconds. We had 230 people.”

Firefighters continue to work along Highway 88, so they’re asking motorists to take it easy along the route between Minden and Jackson.

“There’s going to be a lot of fire engines working in there, so keep your speeds down in that corridor,” he said.

As of 7 a.m. Friday, the Caldor Fire is 71 percent contained at 219,267 acres. The number of firefighters working on the blaze has decreased to fewer than 2,948.

The trails and back country at Spooner Lake will also reopen, though the main entrance, parking lot and picnic area will remain closed for a construction project.

The reopening of state park facilities occurs in time for fee-free day on Sept. 25.

On Friday, sections of the Pacific Crest and Tahoe Rim Trails reopened over the Humboldt-Toiyabe National Forest after the order closing them expired.

A new closure for Scott’s Lake near Hope Valley where the fire base is located was announced to support fire operations.

“Although there has been some relief from the extreme fire behavior seen over the past couple weeks that made this decision possible, the forest is still extremely dry and a single spark could still potentially result in a large fire,” Forest Supervisor Bill Bukelberger said. “It is even more important now that the public recreate responsibly and use extra precautions to prevent wildfires.”

Any national forest land in or around either the Caldor or Tamarack fires is more likely closed than open, so those planning to visit the forest in those areas should check before they go.

The Caldor started Aug. 14 near the middle fork of the Consumes River near Grizzly Flats, the fire claimed hundreds of homes early on as it raged east up the Sierra for a week, before it slowed down below Twin Bridges for as it expanded south toward Kirkwood.

On Aug. 29, the fire began the big push toward Echo Summit that prompted the Aug. 30 evacuation orders in Christmas Valley and then South Lake Tahoe. The next day Douglas County issue the first mandatory evacuation in its history for portions of Lake Tahoe from Stateline to Round Hill, after the governor delegated authority to the county. Fears the fire could cross into Carson Valley prompted evacuation warnings for Foothill residents. However, firefighters stopped the Caldor Fire within three miles of the state line, permitting Tahoe residents to return home on Sept. 4 and lifting warnings for Carson Valley.