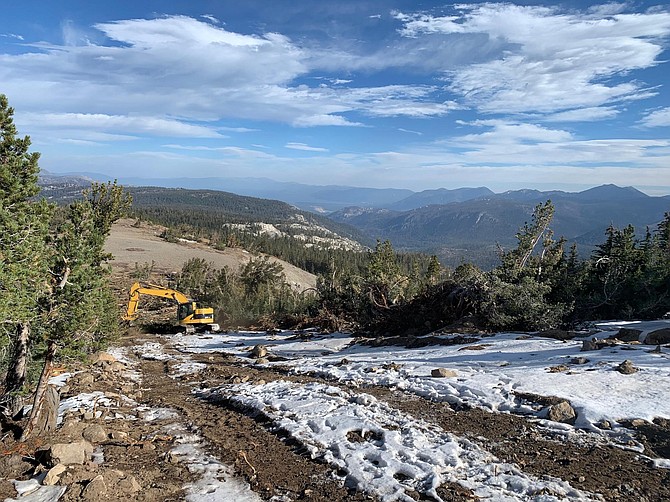 Work is underway to repair the damage done to contain the Caldor Fire after it hit 100 percent on Thursday. U.S. Forest Service photo

Firefighters have a line entirely around the 221,835-acre Caldor Fire after two full months.

Full containment came 10 days early, and while it represents a milestone for the fire that burned within three miles of Douglas County, there is still a lot of work to do, firefighters said.

“Communities in the Plymouth and South Lake Tahoe area will continue to see firefighters over the next several weeks as focus now turns primarily to repairing the over 400 miles of constructed line and 660 points impacted by suppression efforts,” officials said.

Slightly more than half of the line construction repair has been completed by 526 firefighters still assigned to the fire. That’s a tenth of the number who were working at the end of August when it crossed Echo Summit into Christmas Valley.

“Repair efforts set the immediate stage for our resources and community to recovery from this devastating wildfire,” Incident Commander Jeff Knudson said.

Today, Douglas County commissioners are issuing a proclamation thanking firefighters for their efforts it stopping the fire.

The Caldor Fire saw the first mandatory evacuation in Douglas County, when Stateline and Kingsbury Grade were cleared out during the height of the blaze.

Containment also doesn’t mean the fire has been extinguished.

Large diameter trees and stump holes will continue to smolder into the winter. The fire is controlled when managers believe it’s unlikely a fire will jump the lines.

Even a cold, wet winter may not succeed in completely dousing either the Caldor or Dixie fires entirely.

“Under the right conditions, fires can still show themselves once spring comes, snow melts and the tiniest of hot ember finds just enough air and fuel to show smoke,” officials said on Thursday morning.

Researchers in Alaska are examining how “zombie fires” can lurk in duff and other fuels through the winter and come back to life when weather conditions dry out, according to an article in the October edition of Scientific American.

Firefighters are working to get sensitive radio gear out of the fire perimeter in preparation for Sunday’s storm.