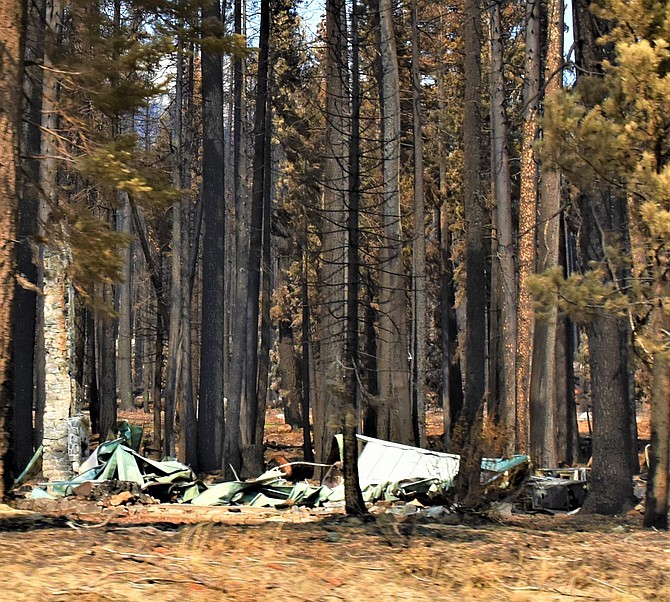 A structure destroyed in the Caldor Fire near Strawberry, Calif., on Oct. 1. Photo by Tim Berube

A new cold front is expected to bring critical fire conditions to parts of the Sierra western slope 11 a.m. Monday to 7 p.m. Tuesday with northeast winds of 30-40 mph.

Firefighters are within a couple of points of closing the ring around the Caldor Fire, but full containment doesn’t mean the mega fire that came within three miles of Carson Valley has been extinguished.

The cold front isn’t expected to produce much moisture over the fire.

Fire officials said the fire generated some smoke visible from the Highway 50 corridor on Saturday as containment reached 98 percent.

“The fire only received light moisture, off and on, for six hours,” officials said on Sunday morning. “This is not what we would call a ‘season-ending’ event.”

Many big trees burned in the fire are still smoldering inside and are expected to fall to the ground and produce more smoke and even flames as they break apart and their interiors are exposed to oxygen.

Southwest winds are knocking needles out of trees burned earlier in the fire, contributing to a fuel bed.

“The chances of these burning needles creating any sort of risk to the fire line is negligible,” officials said on Sunday.

The nearly 1,100 firefighters still working the fire are reporting progress in suppression, repair and rehabilitation on the fire.

“However, it remains extremely dry throughout the fire footprint, and it will be quite a while before the large number of interior hotspots are eliminated.”

Firefighters reported that earlier in the week a large, downed log started burning again, 57 days after the fire passed through the area.

While not posing a serious risk of spreading, it was an indication that some of the very large trees claimed in the fire may still be harboring hotspots.