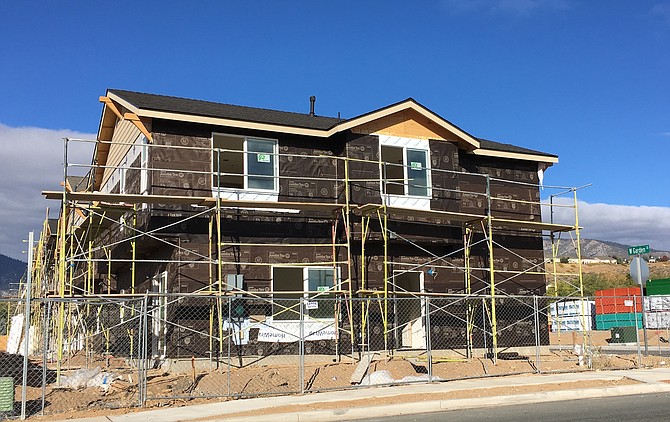 Work on new homes is under way along Vista Grande in Indian Hills.
Photo by Kurt Hildebrand.

The average sales price for a home in Carson Valley set yet another record, hitting $663,360 during the third quarter of 2021, according to the Douglas County Assessor’s Office.

During the month of July, sales of building materials, garden equipment and supplies shot up 25.9 percent, according to the Nevada Department of Taxation.

According to the state, the category went from $5.19 million in July 2020 to $6.5 million for the same month this year. The sales brought the category up to the fourth highest in the county.

Food services and drinking places recaptured its title as top dog during July reporting $11.3 million in July, driven mostly by visitors to the Tahoe casino corridor. Lodging more than doubled over the previous July with $5.28 million. Amusement, gaming and recreation were also up 41 percent to $4 million. Those numbers are expected to crash in September which saw Highway 50 closed by the Caldor Fire.

The battle of brick and mortar vs. the internet, general merchandise stores posted a $10.7 million month in taxable sales during July, compared to $8 million in sales through nonstore retailers.

Douglas County merchants saw taxable sales flatten out for the first month of the 2021-22 fiscal year showing a decrease of .6 percent to bring in $89.2 million.

Gaming numbers at the Stateline casinos were strong in August posting a 7.97 percent increase over August 2020.

The main source of Douglas County’s gaming revenue reported $23.6 million up from $21.8 million. The casinos had an excellent July, resulting in an almost 30 percent increase over the previous year to $55.8 million.