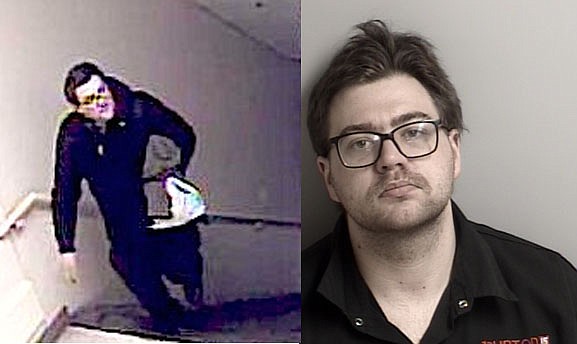 Johnathan Adam Towne's mug shot and a Secret Witness photo issued in May.

A man, who went behind the scenes at Hell’s Kitchen Lake Tahoe, stole the general manager’s purse and left behind a drink cup with his fingerprints, admitted to two counts of felony burglary on Tuesday.

Johnathan Adam Towne, 33, was the subject of a May 6 Douglas County Secret Witness post seeking him for burglary and using someone else’s credit card.

Douglas authorities were alerted by South Lake Tahoe Police that Towne could be the man they were looking for.

On May 13, South Lake Special Weapons and Tactics officers and Douglas investigators served a search warrant on Towne’s Champlain Avenue home and uncovered evidence of at least three thefts that occurred in Douglas County.

Among the items retrieved from Towne’s home were an iPad and iPhone taken on April 15 from a vehicle in the Mont Bleu’s parking garage.

Two days later, Towne made his way to the “back shop” of Hell’s Kitchen to the general manager’s office where he took her wallet, containing $300 cash and credit cards. The credit card was used at the Stateline CVS.

Investigators also located a wallet that had been stolen from a man gambling at Harvey’s on April 27. Towne is also believed to be responsible for a Feb. 28 vehicle break-in.

Towne faces up to 10 years in prison and $20,000 in fines after entering a guilty plea in Douglas County District Court on Tuesday.

He is scheduled to be sentenced on Aug. 24.

District Judge Tod Young said Towne should make sure he’s employed, because he has a lot of restitution to pay.

• A $7,500 warrant was quashed on Tuesday after Douglas authorities confirmed that a 60-year-old man facing a subsequent felony DUI really did miss court due to the coronavirus.

Richard Duane Dow’s arraignment date has been set for July 19.

Dow allegedly had a .185 blood alcohol content when he was arrested.

He faces a mandatory prison sentence of 2-15 years should he be convicted.

•Two ex-felons who were found with firearms face stiff prison terms if they violate their probation.

Randall Matthew Cemper was arrested after deputies found a sawed off shotgun and another loaded shotgun in his closet and shells in his drawer. Cemper also had 5 ounces of marijuana, which is more than the 1-ounce legal limit.

Deputies were looking for a safe that had been reported stolen and had permission to look through Cemper’s room. He had been convicted in 1992 in Oregon. Cemper claimed the shotguns were heirlooms.

When asked why he had a loaded shotgun in his closet, he pointed out that the house had just been burglarized.

Should he fail his three-year probation he faces a 2-6-year prison sentence.

A 27-year-old Gardnerville man admitted to a count of being an ex-felon attempting possession of a firearm.

Joseph Daniel Oaklief was arrested March 18 after an altercation with his girlfriend. His attorney said he thought it was legal for him to possess the firearm, which he received from a co-worker.

Oaklief received a 14-60 months in prison sentence that was suspended for two years.

While some states allow nonviolent felons to request restoration of their gun rights, Nevada is not one of them.