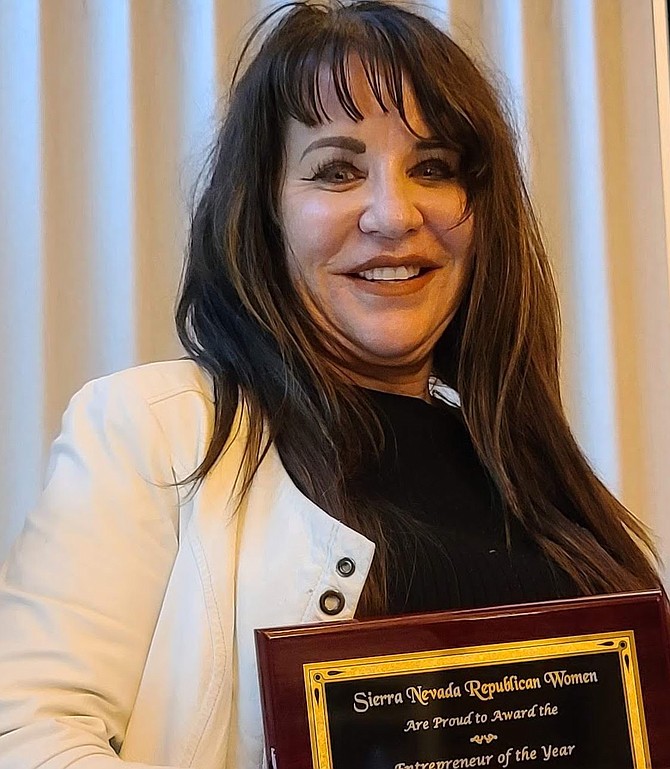 Lori Britton was named the Sierra Nevada Republican Women Entrepreneur of the Year on Wednesday. Photo by Donna Schehl

On Wednesday, Sierra Nevada Republican Women presented the award for female entrepreneur of the year to Lori Britton, owner of A Wildflower in Gardnerville. The meeting was held at the COD Casino’s community room.

Currently celebrating 30 years in business and having received the best florist award for 24 years, Britton was an easy choice for this year’s award.

“She was nominated for consistently maintaining a beautiful shop, providing a valuable service to the community, creating many part-time jobs for locals, supporting causes such as the wine walk, and donating her services to the Douglas County Historical Society and many other local non-profit organizations,” Organizers said.

A native Nevadan, Britton graduated from Douglas High School. She went on to study at Western Nevada Community College and in 1994 was inducted into the exclusive and internationally accredited American Institute of Floral Designers. While there, she had the opportunity to work with many world-renowned AIFD designers.

Both Britton and her mother, Linda Curtis, were founding members of the Sierra Nevada Republican Women. Lori's husband, Capt.Dan Britton, has worked for the Douglas County Sheriff's office for 34 years. Their son Mason is a freshman at Douglas High School.

Britton started A Wildflower in the Anker Building next door to her present location, 30 years ago.

The building's owner Fran Anker, another Carson Valley native, first gave Lori a lecture, and then a chance, when she rented her a retail spot in their building.

Later, when The Record-Courier Center was built in 1996, where Miller’s Market once stood, yet another Carson Valley native, Joyce Neddenriep, came into the picture.

She believed in Lori and asked her to relocate with her to the new building. Neddenriep was the owner of Joyce's Jewelry which is still in operation next door to Britton’s shop today.

While accepting the award, Britton said she recalled fondly the many hours she and fellow native Nevadan Laurie Hickey spent decorating the COD Casino with local artifacts when it was remodeled several years ago.

“We wish her another successful 30 years continuing to bloom in the Carson Valley,” organizers said.