Fentanyl on way to replacing heroin as main opiate 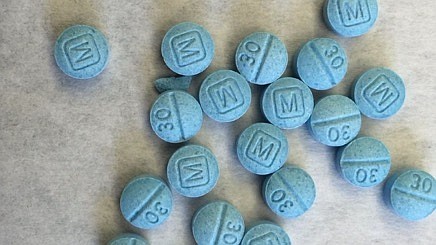 A Lake Tahoe fugitive who led deputies on a chase up Clear Creek last week ate fentanyl in order to avoid being caught with it and ended up in the intensive care unit at Carson Tahoe Regional Hospital.

A Thursday hearing is expected to be continued to February for a woman accused of bringing more than 20 ounces of powdered fentanyl to sell in Douglas County. Her co-defendant admitted to multiple drug trafficking charges and is scheduled to be sentenced next month.

That transaction resulted in a Douglas County deputy requiring five doses of the opiate antidote Narcan to revive him.

“According to the deputies, he was dead,” Douglas County Sheriff’s Capt. Dan Britton told members of the Board of Health on Friday.

Fentanyl seizures in Douglas County went from just half a gram in February 2022 to 266.5 grams in June.

The Douglas County Sheriff’s Office reported seizing 1,290 grams of the drug during the year, up from a single gram and 10 M-30 pills in 2021.

Britton said he expects that fentanyl will completely replace heroin in the near future.

“Fentanyl is the latest trend in the opioid-heroin epidemic,” he said. “People are now turning to fentanyl because it’s easier to make.”

Britton said the drug is coming from Mexico where it is being manufactured using chemicals imported from China.

The Douglas County Street Enforcement Team first encountered fentanyl in May 2021 when they found a gram.

Because the effective strength of fentanyl is so great it is difficult to develop a pill with an accurate measure, so drug producers guess, which means one of the fake pills could contain a lethal dose.

However, during 2022, county law enforcement started coming across the drug in powder form.

“All the fentanyl we’re buying is in powder form,” he said. “The powder is extremely dangerous.”

An October drug buy involving power resulted in five deputies being exposed to the point where they had to be hospitalized.

He said one of the deputies had to be dosed with Narcan five times to overcome the effects of that bust.

Britton said it’s common for users to carry Narcan in case they overdose, but that the curative wears off and the person can go back into an overdose.

He urged anyone who has used Narcan to prevent an overdose call 911 immediately.