Bill that may silence Minden siren on governor's desk 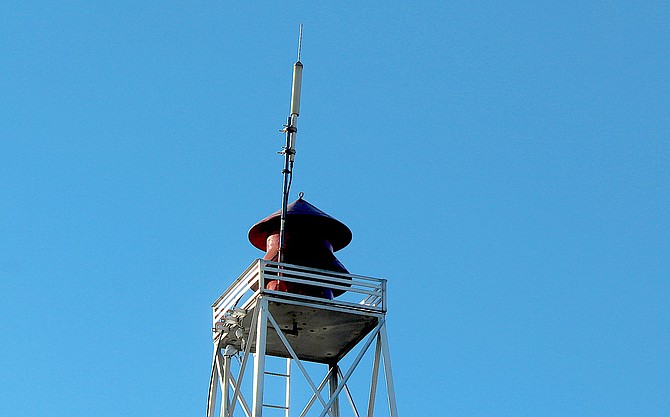 The Minden siren sports a new coat of paint.
Photo by Kurt Hildebrand.

A bill containing a provision that would require local governments to silence any sort of signal associated with previous sundown laws awaits the governor's signature.

After the Nevada Assembly concurred with an amendment dealing with sundown signals on Tuesday, Assembly Bill 88 was transmitted to Gov. Steve Sisolak on Thursday.

Assembly Bill 88 passed the Senate on May 20 with the amendment introduced after the Assembly approved the bill on April 15.

While not associated with a protest bicycle ride planned from Minden to Lake Tahoe, Obsidian Nation spokesman Steve Jerome-Wyatt, a Washoe and Paiute who grew up in Dresslerville, said he plans to be in MInden on Saturday morning.

The protest that will follow the trails that the Washoe used to get to Lake Tahoe is being conducted to raise awareness of the siren’s connection to two ordinances approved in the early 20th century ordering the Washoe out of town by sunset. For more about the ride, visit https://www.bikereg.com/50415

Neither ordinance was remotely constitutional, and when the county code was compiled in 1974, the final ordinance was one of several that were unceremoniously deleted.

Jerome-Wyatt said he sought a public meeting where the Washoe could speak about the siren.

“By stubbornly refusing to let the Washoe Indian people speak out as part of an official public meeting, in support of or in opposition to the Sundowner Siren, Minden is actively promoting the total exclusion of local American Indian people in the democratic process,” he said.

The original ordinance was approved by county commissioners on July 7, 1908, and was published on the front page of The Record-Courier.

On April 5, 1917, not long after county commissioners moved into the new courthouse in Minden, they expanded the ordinance to include the new county seat. That ordinance specified that Washoe had to be out of Minden and Gardnerville by 6:30 p.m. or face up to 10 days in jail or a $25 fine. That ordinance didn’t include an exemption for servants.

Four months later, the first county draft included the names of Joe Mack and George Dutchy, two Washoe men who then had to struggle with the U.S. government before they were permitted to go fight the Germans.

On that same front page, a note reported that a new fire siren purchased by the Gardnerville fire department was installed at the Odd Fellow’s Hall and was audible for several miles, including Minden.

One of the issues complicating the debate is that there was never any mention of a signal in the ordinances.

In an interview with The Record-Courier published on Sept. 22, 2006, two days after the siren was turned back on after being silenced, State Archivist Guy Rocha said he couldn’t find an official link between the siren and the sundown ordinances in the records.

However, that didn’t mean there wasn’t a link for the Washoe.

“I spoke with Winona James, who told me that when the siren went off, they knew to get off the streets,” Rocha said. “She believed it to be true. It was her perception. In all probability, there was no official public policy that the siren was to be used in an additional way to tell people they have to leave the town, but there’s no question in my mind that the perception was planted somehow in the minds of Washoe people at the time.”

I agree the Siren should officially close down due to its previous usage as a warning, etc. Perhaps the Governor can give a speech instead of just a written document to explain the circumstances and beginnings of this town Cryer. However there is no reason for it not restarting in the year 2021 as a town clock or barometer. Many smaller towns across the U.S. use this same system with no mention as a warning device. I think it's great that this time in our history has passed and it should be acknowledged by our Governor.

Good ridden, the county needs to move on from this past ideology and go forward. No left or right stance on this just what’s good for the image of our society.